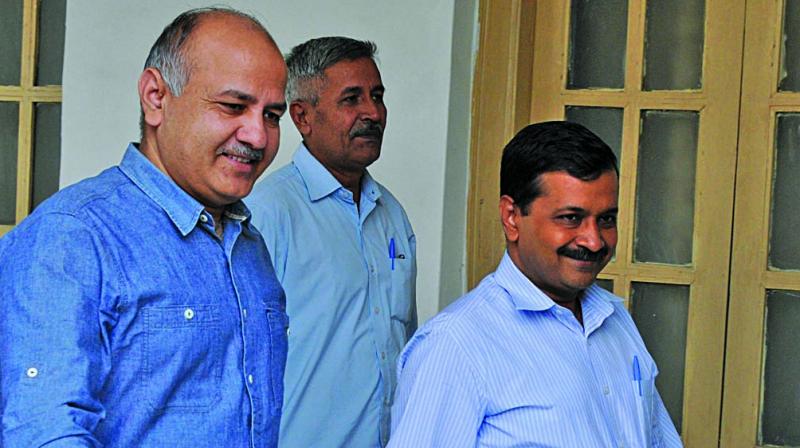 Delhi chief minister Arvind Kejriwal (left) and deputy CM Manish Sisodia arrive for a special session of the Delhi Assembly on the demonetisation issue on Tuesday.

New Delhi: Terming demonetisation as a case of “fraud” with the nation aimed at benefiting a “particular political party,” the Delhi Assembly, on Tuesday, unanimously passed a resolution demanding the rollback of move. The resolution sought President Pranab Mukherjee’s intervention in directing the Centre to withdraw the “draconian demonetisation.”

The Assembly sought President Pranab Mukherjee’s intervention addressing the emergency session of the Delhi Assembly where chief minister Arvind Kejriwal vociferously accused Prime Minister Narendra Modi of receiving bribes while he was the Gujarat chief minister and sought a judicial probe into the issue.

Quoting from what he said were official records, Mr Kejriwal referred to an October 15, 2013, Income-Tax raid on the Aditya Birla group in Delhi during which Rs 25 crore was seized in cash. He said that officials seized documents, account books, computer records, and a laptop belonging to a senior company official that had a message that stated “Gujarat CM-25 Crore (12 done rest?).”

“It clearly suggested a payment of Rs 25 crore to the then Gujarat chief minister,” he said. Mr Kejriwal urged the Assembly to add the allegations against the Prime Minister to the resolution on demonetisation and urged President Mukherjee to order a Supreme Court monitored probe into it.

The House also resolved to refer the allegations of receipt of bribes by “persons holding high offices from Birla and Sahara Groups” to the Supreme Court with a request to order suitable inquiry. The AAP leader claimed that the demonetisation was actually a “war against the poor people of the country.” He said that while many in the country were not able to conduct weddings, there were reports that `500 crore was being splurged at the marriage of the daughter of a mining scam accused in Karnataka who is known to be close to BJP.

Mr Kejriwal urged the President to direct the government to withdraw at once the demonetisation scheme that has led to a cash chaos all over the country with millions thronging banks and ATMs. He said that the November 8 announcement to spike the 500 and 1,000 rupee notes had caused misery to ordinary people. Mr Kejriwal repeatedly accused PM Modi of helping big corporate houses and said that Mr Modi had waived off Rs 1.14 lakh crore worth of due of the corporate houses but has threatened people who deposit more than Rs 2.5 lakh in banks.

Participating in the discussion, AAP’s Okhla MLA Amanatulalh Khan said that Mr Modi will not understand the pain being faced by families due to demonetisation as “he does not have a wife or children.”

Protesting against Mr Kejriwal of “misusing” the privileges of the House, the Leader of Opposition in Delhi Assembly, Vijender Gupta, attacked him for leveling “false and malicious” allegations against Prime Minister Narendra Modi. The party also accused the chief minister of trying to “instigate riots” in the country on the demonetisation issue. He was ordered to be marhsalled out by the Speaker for this “hindrance.” Mr Gupta also charged that Kejriwal is trying to “mislead” people and trying to “instigate riots” in the country.