The present outside the bank had to intervene and disperse the crowd. 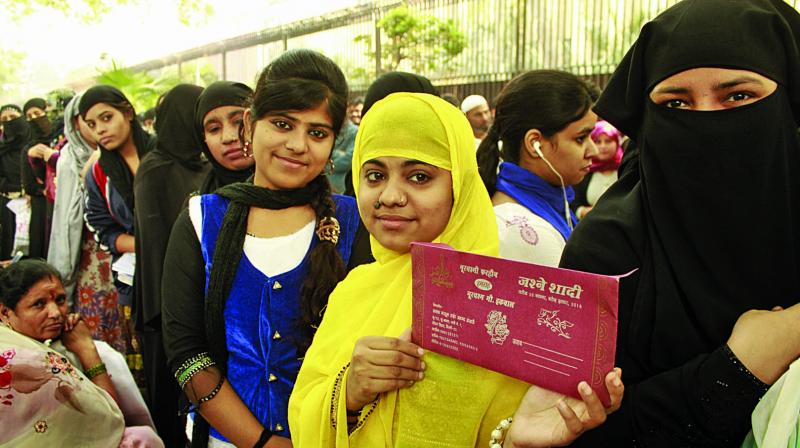 Nurchasmi Farhin shows her wedding card as she waits in a long queue to exchange old notes outside the Reserve Bank of India on Tuesday. — (Photo: PRITAM BANDYOPADHYAY)

New Delhi: The Delhi police had a hard time managing long, winding queues outside banks and ATMs where people gathered to get cash after a week since the demonetisation of Rs 500 and Rs 1000 notes on Tuesday. There were reports of police having to resort to “minor lathicharge” on people waiting outside the Reserve Bank of India here.

Customers waiting outside banks ran out of patience in some parts of the city as banks and ATMs ran dry due to the panic withdrawl by a number of people. The Delhi police has recieved 3500 complaints about minor scuffles and arguments due to which cops had disperse the crowd outside the ATMs on Tuesday.

The police said that the most of the calls about arguments broke out as a customers tried withdrawing maximum amounts possible through multiple credit or debit cards in order stock up or avoid inconvience. The police have mapped the type of complaints they have recieved and would sensitise the policemen posted at the ATMs to lookout for the incidents that would spark violence.

In Central Delhi, a scuffle a heated argument ensued at a bank near Pahargunj and Jhandewalan as the authorities tried to control a crowd that had entered the bank to deposit money. In Walled City, a group of men got into an argument with SBI officials as the employees managing the gates stopped a people from entering the bank during the closing hours. The present outside the bank had to intervene and disperse the crowd.

Arguments were reported from a government bank branch on Netaji Subhash Road near Daryaganj after officials shut the gates in the afternoon once the working hours got over. The confusion was resolved after a police team convinced the customers about the reason, said officers.

A scuffled was also report from Central Bank branch in Dilshad Garden, the matter was, however, resolved when the area SHO reached the spot. However, senior police officials denied any case of violence or lathi-charge done by police. “There was no lathicharge. The bank was closing down and people weren’t going away. We informed them that there won’t be any transaction and asked them to leave,” the police said.