Families of deceased will be provided a solatium of Rs 10 lakh each from Chief Minister's Public Relief Fund, Palanisamy said. 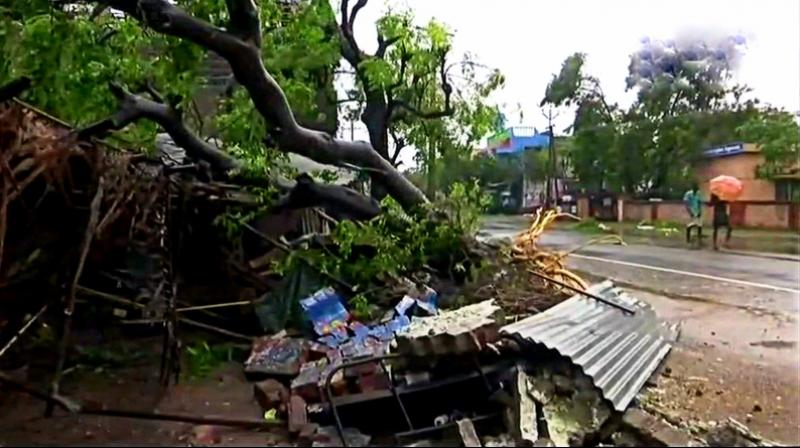 Trees uprooted and houses damaged in Nagapattinam in the overnight rainfall and strong winds which hit the town. (Photo: Twitter | ANI)

Nagapattinam/Chennai: At least 11 people have died as cyclonic storm ‘Gaja’ made landfall in Tamil Nadu with wind speed gusting up to 120 kmph, Chief Minister K Palanisamy said on Friday.

Speaking to reporters at Salem, Palanisamy said relief work will be taken up on a war-footing and that the work was already underway.

"The government has received information that so far 11 persons have died," he said without divulging further information.

He said the families of the deceased will be provided a solatium of Rs 10 lakh each from the Chief Minister's Public Relief Fund (CMPRF). Those with severe injuries will be provided with Rs one lakh each while people who had sustained simple injuries will get Rs 25,000 as relief, he added. The damage caused by Gaja, including to the fishing sector, was being assessed, he said.

Over 80,000 people were evacuated from low-lying areas as Gaja crossed Tamil Nadu's coast between Nagapattinam and nearby Vedaranyam early Friday, bringing in heavy rains in coastal regions.

Gusty winds due to the cyclonic storm resulted in hundreds of trees and electricity poles being uprooted in Nagapattinam and Karaikal districts. As the cyclone's landfall began, coastal towns including Cuddalore, Nagapattinam, Thondi and Pamban in Tamil Nadu and Karaikkal and Puducherry received rainfall ranging between 3 cm and 8 cm.

Cuddalore received 8 cm, Nagapattinam 5 cm and neighbouring Puducherry and Karaikkal 5 cm each up to 5.30 am Friday, according to a MeT official in Chennai.

According to the Tamil Nadu State Disaster Management Authority, as many as 81,948 people were evacuated from low-lying areas and sheltered in 471 relief centres in six districts - Cuddalore, Nagapattinam, Pudukottai, Thanjavur, Ramanathapuram and Tiruvarur.

Power supply has been suspended since Thursday evening. Traffic remains disrupted in most parts of Nagapattinam and Karaikal districts.

A holiday has been declared for educational institutions in Nagapattinam district.

Though the centre of the cyclone entered land early Friday, it took about two hours more for the rear sector of eye wall to enter the land region. "Entire eyewall region lies over land. Maximum wind speed was reported at Adiramapattinam 117 kmph followed by Nagapattinam 100 kmph and Karaikkal 83 kmph," the latest bulletin said.

Due to heavy wind during the cyclone's landfall, trees, high mast lamps and some power poles in locations including Vedaranyam, Mannargudi, Irulneeki in Tiruvarur district got uprooted.

Uprooted trees have fallen on the roads which are being removed by civic workers. Electricity supply was disconnected here and in several other coastal regions in view of the cyclone's landfall, officials said.

Revenue Minister R B Udaya Kumar told reporters that the government has tackled the cyclone situation successfully. "This was a challenging task...we are confident that we have faced it safely 100 per cent" he said, adding all post-cyclone tasks like cleaning up storm-affected areas has begun.

The government has got inputs of damage to houses and other properties and the extent of damage will be evaluated, he said.

Nagapattinam district Collector C Sureshkumar said PWD and TNEB officials are working on removing the uprooted trees and to restore traffic and electricity supply. He also said more than 15,000 electric poles have been kept ready and all the damaged electric poles will be replaced on a war-footing.

The collector further said the district administration had commenced the process of assessing the damage due to the cyclone.

Four teams each of National Disaster Response Force personnel have been already deployed in Nagapattinam district while two teams of the state disaster response force are in Cuddalore district, officials had said Thursday.

Karaikal Collector R Kesavan said over 6,000 people from 11 coastal hamlets in the district were staying in relief camps in the district. They were being provided with drinking water and food, he added.

The collector said reports of trees being uprooted under the impact of the cyclonic storm were received from different areas.