The home ministry sources said the earlier decision of withdrawing such cases during the tenure of former CM Mufti was an “isolated incident”. 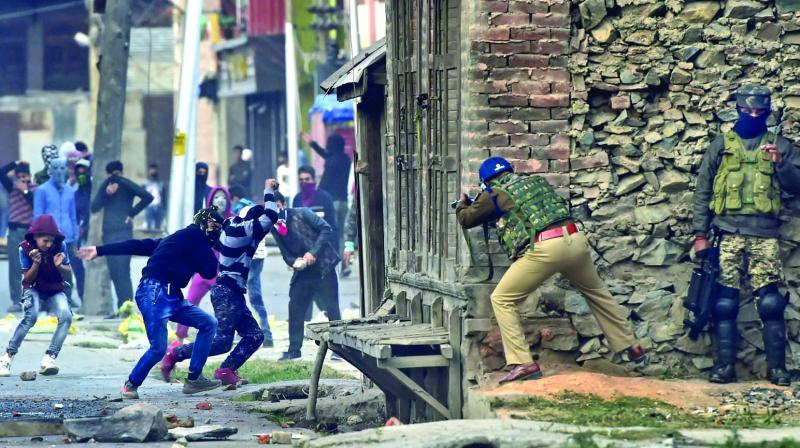 Last month an Army jawan was killed in the Valley by the stone pelters evoking sharp reaction not just from Gen Rawat but the security establishment as well. (Representational image)

New Delhi: Centre and the Jammu and Kashmir administration have decided not to grant any further relief to those involved in incidents of stone pelting, even if they are first time offenders.

The home ministry sources said the earlier decision of withdrawing such cases during the tenure of former CM Mehbooba Mufti was an “isolated incident” and no amnesty from now on would be given to stone pelters. Earlier this year both Centre and the J&K Government, in which BJP was a coalition partner, had decided to grant amnesty to 9,730 stone pelters after it was decided to withdraw 1,745 such cases majority of which were of first time offenders. But sources said now that the State is under governor’s Rule both home ministry and the state administration have decided to take a tough line against stone pelters and have decided that no further amnesty would be provided such offenders in future.

Even Army Chief Bipin Rawat also in the recent past has come out strongly against the role of stone pelters specially when the target security forces during an ongoing operation.

Last month an Army jawan was killed in the Valley by the stone pelters evoking sharp reaction not just from Gen Rawat but the security establishment as well.

In fact, sources added, now that J&K was under Governor’s Rule security forces want that stone pelters and those protestors obstructing security forces during an ongoing anti-terror operation should be booked under stringent provisions of the law.

“We have already requested both the Home Ministry and the State administration that cases against these stone pelters should be lodged under  strict provisions of the law so that it sends out a strong message. Clearly, the earlier amnesty scheme failed to stop incidents of stone pelting so now we need to take a tough stand against them. Both Army and para-military forces involved in counter insurgency operations in the Valley are on the same page on this issue. Centre and State have assured us that no further relief from now on would be given to these stone pelters,” a senior security official added.

Centre’s interlocutor on Kashmir, Dineshwar Sharma, who also happens to be the former chief of Intelligence Bureau, is also not likely to make any recommendation which would provide any relief to stone pelters or similar offenders.