The decision was taken following an emergency meeting between Mr Shah, the Union Health Ministry and Delhi government 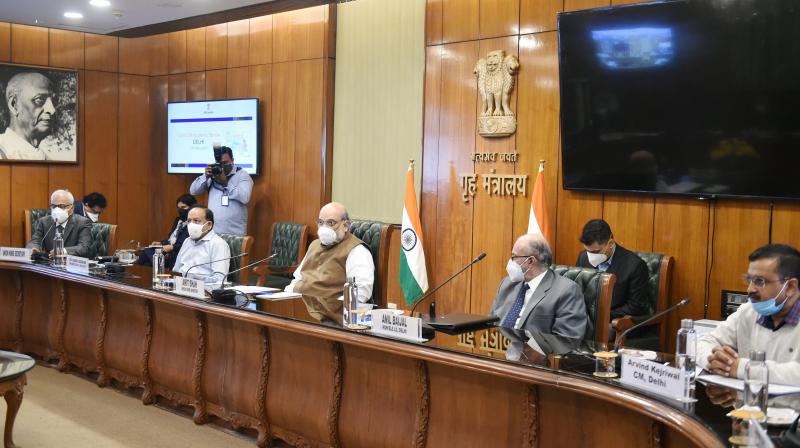 New Delhi: In view of rising COVID-19 cases in Delhi, Union Home Minister Amit Shah on Sunday ordered doubling up of RT-PCR testing in the national capital, increase in hospital beds and ventilators, better tracking and management of home isolation patients and review of containment measures. Besides, house-to-house survey in the entire Delhi will be conducted by the teams of AIIMS, Delhi government and MCDs.

The decision was taken following an emergency meeting between Mr Shah, the Union Health Ministry and Delhi government to see what best can be done to check the spread of infection.  Delhi Lt Governor Anil Baijal, Health Minister Dr Harshvardhan, Delhi Chief Minister Arvind Kejriwal and Delhi minister Satendra Jain  were among those who attended the meeting.

“We need to save as many lives as possible and for that the central government is making available additional oxygen cylinders, high flow nasal cannulas, and other important medical equipments to the Delhi government,” Mr Shah said.

The Home Ministry has decided to further increase health and medical facilities in the NCR region. It was decided to go in for a much more aggressive testing, tracing and isolation in the entire NCR region. Along with this, the focus would be on increasing the number of ICU beds along with ventilators in private and government hospitals.

In view of the shortage of medical staff in Delhi, it was decided to provide additional doctors and paramedical staff from the CAPFs and they would soon be airlifted to Delhi. Other medical facilities of CAPF too will be utilized to provide additional corona facilities in Delhi. The ITBP has already set up the country’s biggest coronavirus hospital in Delhi’s Chattarpur area.

Delhi government and Delhi Commissioner of Police have been asked to strictly enforce the necessary measures, especially wearing of face masks, so that there is no laxity in observance of Covid-19-appropriate behavior.

The authorities will focus on improving the recovery rate and bringing down the death rate. Delhi’s present death rate ranges between 1.5 to 1.8 per cent. The high positivity rate in the Capital continues to be a matter of concern though officials in the meeting were hopeful that the situation will come under control within the next 8 to 10 days.

Delhi is facing a peculiar problem as despite a complete ban on bursting of crackers till November 30, the city and its neighbouring area defied the ban on Diwali pushing pollution levels to "severe category." Experts believe that poor air quality can trigger more COVID cases.

Apart from Delhi. Kerala and West Bengal are also reporting a high number of cases while Maharashtra is now witnessing a decline.