India   All India  16 Dec 2016  Parliament Winter Session one of the least productive sittings in 15 years
India, All India

The productivity of work done in the Lok Sabha was pegged at 15.75 per cent, while it was 20.61 per cent in the Rajya Sabha. 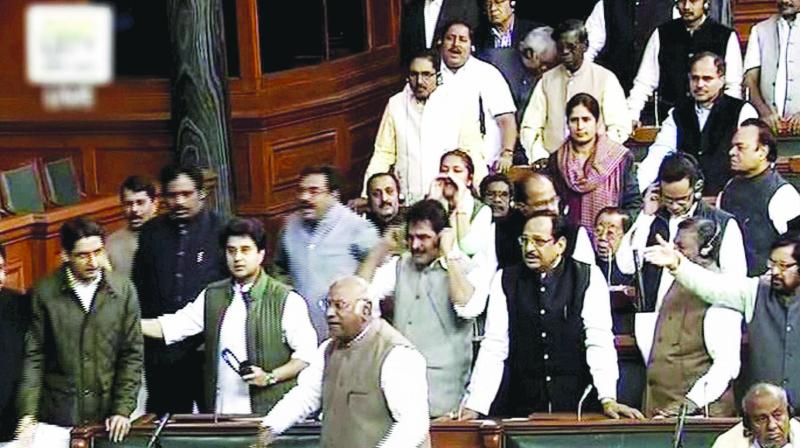 New Delhi: The winter session of Parliament has been one of the "least productive" sessions for both Houses in the past 15 years with the issue of demonetisation leading to repeated disruptions, a research body has claimed.

According to data provided by the Parliamentary Affairs Ministry at the end of the session on Friday, the productivity of work done in the Lok Sabha was pegged at 15.75 per cent, while it was 20.61 per cent in the Rajya Sabha.

As per the data collated by PRS Legislative Research, as a result of repeated disruptions, only two of the 330 listed questions in the Rajya Sabha could be answered orally.

"This has been one of the least productive Question Hour sessions for the Rajya Sabha in the last three Parliaments (13th, 14th and 15th Lok Sabhas). Previously, one of the 480 questions and none of the 420 questions were answered orally in the winter sessions of 2010 and 2013, respectively," it said.

In the Lok Sabha, 11 per cent of the questions could be answered orally. This was the least productive Question Hour of the 16th Lok Sabha, it said.

The session hardly saw any legislative action except for the passage of the Rights of Persons with Disability Bill by both the Houses. Significantly, this legislation was cleared on Friday after a brief debate with a rare bonhomie, similar to the one witnessed in the Rajya Sabha on it two days back.

According to a press note issued by the Parliamentary Affairs Ministry, during the session 10 bills -- all in the Lok Sabha -- were introduced. While the lower house passed four, the Rajya Sabha could pass only one bill.

Since the 16th Lok Sabha was constituted in middle of 2014, the lower house spent more time discussing bills as compared to the Rajya Sabha.