UP CM Adityanath’s home district is undergoing a makeover similar to the one seen in Mulayam Singh’s native village during SP rule. 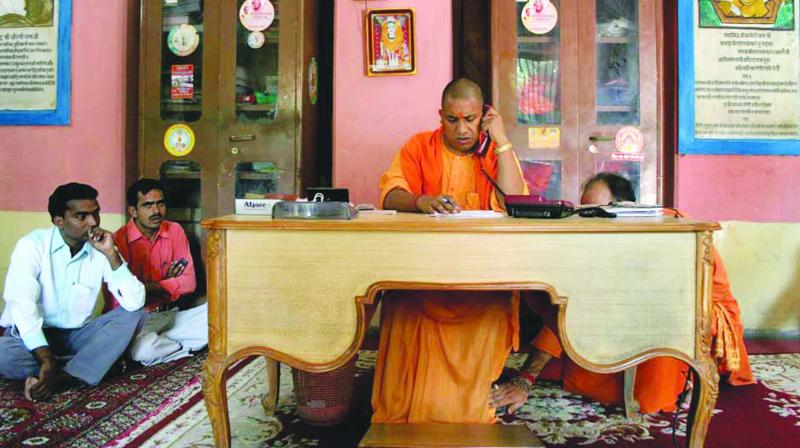 Lucknow: Nine months after Yogi Adityanath took over as chief minister of Uttar Pradesh, his home district Gorakhpur is witnessing an unprecedented drive for a makeover. The special focus on Gorakhpur has refreshed memories of how Sefai, the native village of the Mulayam Singh Yadav, was pampered by the previous Samajwadi Party regime.

Like Sefai, Gorakhpur now tops the priority of the BJP-led state government which has already revived many old projects and drawn a blueprint for new ones.

Officers are now clamouring for a posting in the saffron-clad chief minister's district since it would automatically mean increased proximity to Mr Adityanath who visits his home district almost every week.

Amid high official focus on Gorakhpur, the state government is working on the revival of a fertilizer factory that has been shut for several years. The fertilizer factory is all set to be revived by 2019. A new LPG bottling plant is also on the cards. Revival of closed sugar mills in the area are also a priority area.

Other projects that have been finalised and are in various stages of taking off include Gorakhpur metro and a branch of the All India Institute of Medical Sciences (AIIMS).

Earlier this land had been allocated to the education department to set up a library and research centre. This land will be given to the tourism department which will develop it as a tourist destination that will also boost the economy of eastern UP.

The Gorakhpur Development Authority has already undertaken a survey of the entire lake and the surrounding area, official sources said.

"Besides these projects, beautification of parks, broadening of roads, redevelopment of Ramgarh taal and availability of potable water to check water-borne Acute Encephalitis Syndrome (AES) are also being undertaken", said a senior official in the chief minister's secretariat.

It may be recalled that Sefai, the native village of Samajwadi Party president Akhilesh Yadav and party patriarch Mulayam Yadav had emerged as the hub of development in the previous government.

The annual Sefai Mahotsav was one of the biggest cultural events organised there in which the government machinery was blatantly used.

SP spokesman Sunil Singh Sajan said, "The BJP bitterly criticised us for developing Sefai and now that all resources are being diverted to Gorakhpur, they owe an answer to the people".

According to Adityanath, he wants to change the identity of Gorakhpur.

"When I first became MP, Gorakhpur was known as the crime capital of northern India and I took the support of social organisations, traders and youth to counter the mafia. Now, I want that Gorakhpur should be known as a developed zone," he told officials at a meeting recently.

The state government is also working overtime to improve the power situation and ensure 24 hour power supply. Efforts are also being made to improve the quality of water supply in Gorakhpur city.

To further strengthen the law and order situation, state director general of police has sent a proposal to open 24 new police stations in districts, coming under the "Gorakhpur zone".

Special focus is on the 4,000-odd families from the Vantangiya community that lives in forest areas in Gorakhpur and adjoining Maharajganj districts as it has been deprived of basic facilities like school, hospitals and power supply since independence.

Mr Adityanath, who recently visited a Vantangiya village said that it will be accorded the status of revenue village, that will government investment. He also asked officials to ensure development in other villages with sizeable population of this community, which lives in forests. Vantangiya community, brought from Burma now Myanmar for afforestation during the colonial rule, got voting rights in September.