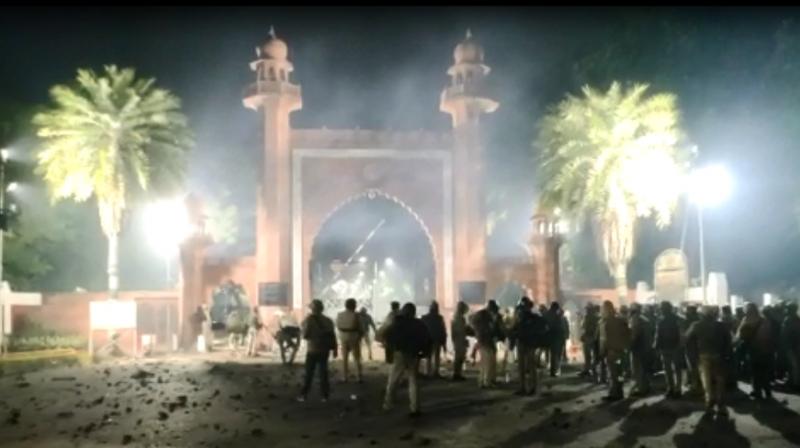 The clashes at AMU started after an agitation by Delhi's Jamia Millia Islamia students against the legislation turned violent and police used batons and tear gas to disperse them. (Photo: Screengrab)

Aligarh: Hundreds of AMU students protesting against the amended Citizenship Act clashed with police on Sunday at a campus gate, leaving 60 injured.

After the protest, the administration announced closure of the university till January 5. Aligarh Muslim University (AMU) Registrar Abdul Hamid said the police entered the campus late Sunday night and clashes were reported from inside.

"Hostels are being evacuated," he said. Uttar Pradesh Chief Minister Yogi Adityanath appealed to the residents of the state to maintain peace and harmony.

"People should not pay attention to the rumours about Citizenship Amendment Act being spread by some vested interests," he was quoted as saying in a statement. Additional Chief Secretary (Home) Awanish Awasthi said, "Section 144 of CrPC remains imposed in all districts of Uttar Pradesh since November 9".

The clashes at AMU started after an agitation by Delhi's Jamia Millia Islamia students against the legislation turned violent and police used batons and tear gas to disperse them. Several students were injured in the national capital. The AMU students gathered at the Babey Sir Syed Gate and raised slogans against the police action on the demonstrators in Delhi. The students broke the police cordon and fought pitched battles with the police. "About 60 students are being treated at Nehru Medical College Hospital and most of them are with trauma and eye injuries caused by tear gas," Chief Medical Officer Dr Nisar Ahmad said.

AMU Proctor Prof Afifullah Khan said some security personnel were injured in brick-batting near the gate. An official of the Rapid Action Force, who sustained head injuries, was seen asking for a helmet in a video. Tension prevailed in the area as police used batons and tear gas to control the situation. Police have sealed all gates to the campus. The registrar said the administration, along with the university, were in touch with the protestors and things were in control.

"But in the evening, suddenly some students and unruly elements started pelting stones and also damaged property, due which a request was made to the administration to use force, so as to control the situation," he said. There is no loss of life and property, he added. "The university is closed from today (15/12/2019) till 05/01/2020. This is being done due to disturbances created by some antisocial elements for last three days," he said. "All other offices will remain open as usual and the closure of the university is for the purpose of reading and examination only. The remaining examination will be conducted after 05/01/2020," he said in a statement. He said the schedule for examination will be notified later.

The district magistrate has been requested to make arrangements so that the hostellers could be sent home through buses. Rail officials are also being contacted in this regard, he added. ADG, Agra zone, Ajay Anand told reporters here that the situation is under control and whatever steps are needed to maintain peace will be taken. When asked whether the deputy inspector general sustained injuries in the clash, Anand said, "Some police personnel have sustained injuries. Whatever legal steps have to be taken, will be taken."

Reacting to reports that some students were protesting in outside Darul Uloom Nadwa (Islamic seminary) in Lucknow, Inspector General (Law and Order) Praveen Kumar said "there is total peace in UP". He said some students came out for a while but were sent back to the campus.