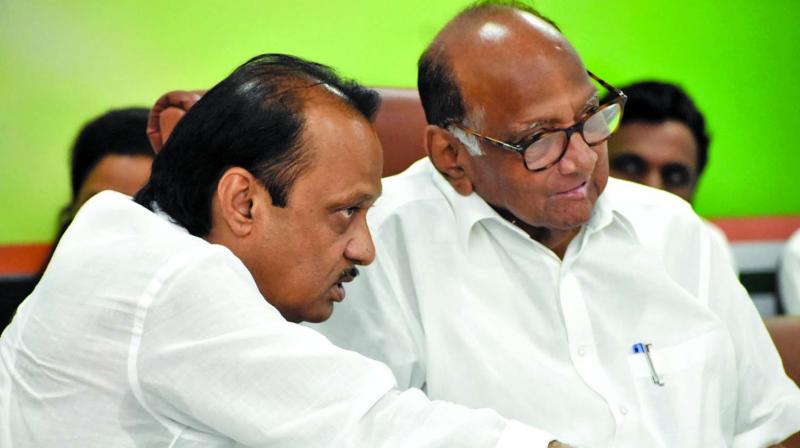 Nagpur: It appears that the Con-gress still does not have complete faith in its ally of 20 years, the NCP. While state Congress leaders have managed to establish extremely cordial relations with chief minister Uddhav Thackeray, the party is sceptical about the NCP and its chief, Sharad Pawar.

Two weeks into the Maha Vikas Aghadi (MVA) regime, Congress leaders are saying that they find Mr Thackeray a very reasonable leader, but Mr Pawar has been playing a double game with the Congress and Sena since the beginning because of which the alliance is facing many hiccups. “We are confident that we will complete a full term under the leadership of Mr Tha-ckeray despite our ideological differences. He is a very reasonable leader and accommodating of all-iance partners. But none of us has the same confidence about the NCP,” said a senior Congress leader on Sunday.

The MVA experiment had almost failed when NCP leader Ajit Pawar suddenly joined hands with the BJP and he, along with former chief minister Devendra Fadnavis, took oath as deputy chief minister and chief minister respectively in the wee hours of November 23. However, the NCP chief immediately distanced hi-mself from his nephew’s actions.

“All we know that Ajit Pawar decided to support the BJP after 8.30 pm on November 22, President’s Rule in Maharashtra was revoked at 2 am and the new government was swo-rn in. These things did not happen without the appro-val of Prime Minister Nar-endra Modi. But it is also true that such a coup cannot be carried out ove-rnight. It was well planned, and therefore it was impossible that the senior Pawar was unaware of it,” the Congress leader said.

An MLC, who was previously associated with the NCP, also confirmed that Ajit Pawar had switched sides with the complete knowledge of his uncle.

“The BJP did not blame Ajit as the party knew that he was made the scapegoat,” the MLC added.

Another Congress leader, who has also worked in New Delhi, also alleged that the Sena’s first atte-mpt to form the government on November 11 was thwarted by the none oth-er than the NCP supremo.

However, state Congress chief Balasaheb Thorat denied the existences of any misgivings among the MVA constituents. He said, “The MVA government will complete its five-year term under the leadership of Mr Thackeray.”

“Ajit Pawar had told Mr Fadnavis that he had decided to support the BJP after talking to his uncle. Mr Fadnavis is also an astute politician. He would not have taken such a bold step without a concrete assurance from the NCP. But the NCP chief did a volte-face because of the emerging situation then,” the MLC, said referring to how Ajit’s coup had in fact raised a question mark on the senior Pawar’s trustworthiness.

“The BJP did not blame Ajit as the party leadership knew that he was made the scapegoat,” the MLC added.

Another Congress leader, who has also worked in New Delhi, also said that the Sena’s first attempt to form the government on November 11 was also thwarted by the NCP supremo.

After the BJP informed governor Bhagat Singh Koshyari on November 10 that it did not have a majority, the governor had asked the Shiv Sena to express its willingness and show that it had the required support of MLAs to form the government within 24 hours. The Sena did not get Congress’ letter of support on time. On November 12, President’s Rule was imposed in Maharashtra.

“Sonia Gandhi and Rahul Gandhi were reluctant to support the Sena because of the ideological differences. But Congress MLAs wanted to keep the BJP out of power. After a lot of difficulties, we convinced Mrs Gandhi to join forces with the Shiv Sena. After she agreed to send a letter of support, she personally spoke to Mr Pawar over the phone. But he told her that he had no talks with the Sena on government formations. I was privy to this conversation and all of us were shocked,” the Congress leader said.

He added that the Sena’s Rajya Sabha MP Sanjay Raut was meeting Mr Pawar almost every day since the Assembly election results were announced on November 24.

State Congress leaders have now taken the initiative to ensure that the Sena does not need the NCP as a mediator.

However, state Congress chief Balasaheb Thorat denied the existences of any misgivings among the MVA constituents. He said, “The BJP is trying to create distrust among us. But they will not succeed. The MVA government will complete its five-year term under the leadership of Uddhav Thackeray.”