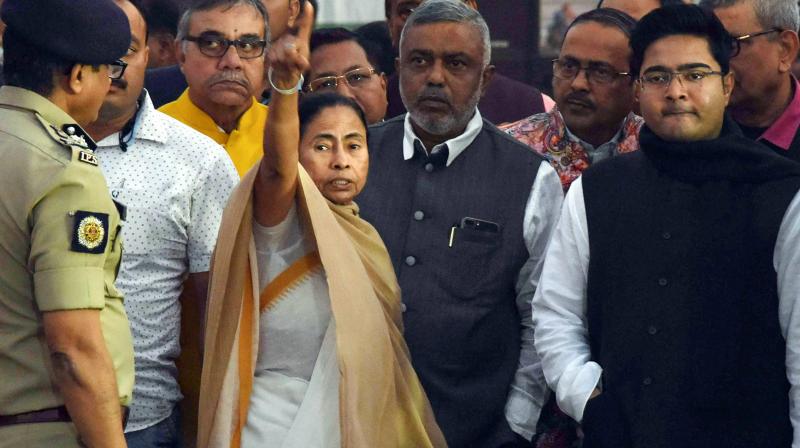 Kolkata: West Bengal Chief Minister Mamata Banerjee on Thursday said the mega opposition rally being hosted by the Trinamool Congress in Kolkata on January 19 would sound the "death knell" for the BJP in the Lok Sabha polls and regional parties would be the deciding factor.

She also claimed that the BJP's seat count in the general election will not cross more than 125.

The number of seats that the state parties will win will be much more than the BJP's, she further claimed. "The federal parties, that is the regional parties, will be the deciding factor after the elections," she told the media in Kolkata.

"The rally will sound the death knell for BJP ... Obviously, they (BJP) will not cross more than 125 seats," she said in reply to a question. "Every political party has a vision ... This will be a grand alliance of people," Banerjee said about the rally.

She visited the Brigade Parade grounds, the venue of the rally, to check the arrangements.

Asked whether the rally would be like the one she held in 1993 against the then ruling Left Front in the West Bengal, Banerjee said, "I was then a leader of the state Youth Congress. But now there will be various opposition leaders attending the rally.”

"I don't want to say anything, let them (opposition leaders) say. I want to hear them. Everything will be based on consensus," she added.

Banerjee said the rally would start from 12 noon. "Several leaders will attend and everybody will speak more or less. They will address the nation."

Asked to comment on BSP supremo Mayawati not attending the rally, she said the party's senior leader Satish Chandra Mishra will be here. "This is a big thing for us." Senior Congress leaders Mallikarjun Kharge and Abhishek Manu Singhvi will attend the programme, she said.

"I have come here to look at the security arrangements as so many former and present chief ministers, former prime minister and several important leaders will be attending the rally. We are all waiting for them," she said.