Earlier on Wednesday night, divers also detected a body at depth of nearly 210 feet inside the rat hole mine in Meghalaya. 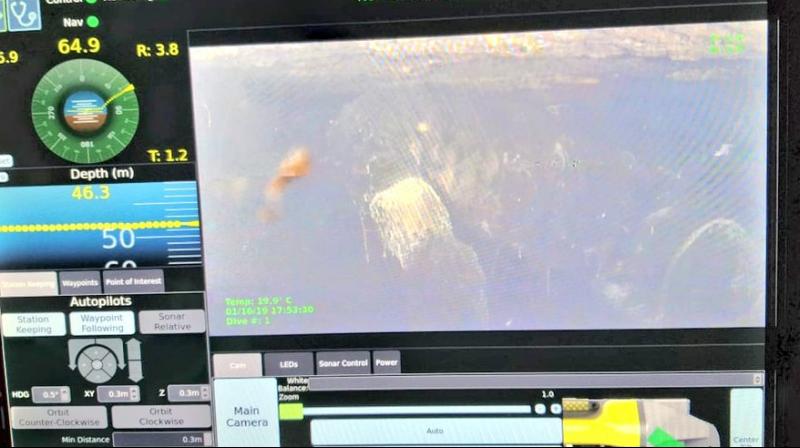 The body was pulled up to mouth of the mine, the spokesperson of the Indian Navy said adding that the body shall be extracted out under the supervision of doctors. (Photo: Twitter | @indiannavy)

Mumbai: Over a month after operations began to search and rescue 15 miners trapped in a deep coal mine in Meghalaya, Navy divers and underwater remotely operated vehicles on Thursday spotted a few skeletons.

However, it is not clear if the skeletons are of the missing miners, reports said.

According to a report in The Hindustan Times, senior government officials, on condition of anonymity, said that high Sulphur content in the mines may have led to the decomposition of bodies.

Forensic Experts have been called to conduct a DNA test to identify and match the skeletal remains, the report added.

Earlier on Wednesday night, the divers also detected a body at a depth of nearly 210 feet inside the 370-foot-deep mine in East Jaintia Hills.

The body, which is yet to be identified, was pulled up to the mouth of the "rat-hole" mine, the spokesperson of the Indian Navy said adding that the body shall be extracted out under the supervision of doctors.

The video footage was shown to some of the families of the miners and they were told that trying to retrieve it may cause the body to completely disintegrate, a report in NDTV quoted officials as saying. The families will share their views on whether bodies should be retrieved or not tomorrow.

"Operation by Navy started three weeks ago. We are a team of 10 people. We have sent a team of divers with an officer and latest equipment. Last night, we recovered a dead body at a depth of around 150 feet from the surface. For now, divers are using a hit and trial method. The search operation will be continued till the government asks us to step back," Captain D K Sharma said.

Around 200 rescuers from the Navy, NDRF, the Odisha Fire Service, State Disaster Response Fund, states Fire service and others from Coal India and private pump maker Kirloskar are involved in rescue operations.

A team of doctors and other senior officials are also monitoring the rescue operations from the spot.

Fifteen miners were trapped in the illegal mine in Lumthari village since December 13 last year, after water from the nearby Lytein river and adjacent mine flooded it.

Last week, the Supreme Court pulled up the state government for its inaction against illegal miners while saying that rescues efforts must continue.

The apex court asked the Centre and the Meghalaya government to take help of experts and continue efforts to rescue the miners. “Carry on with your rescue efforts, what if all or at least some are still alive? Miracles do happen,” a bench headed by Justice AK Sikri said.