India   All India  17 Feb 2020  Ragas in the morning, with the slowly emerging winter sun
Life, Art

The recent concert by Vidushi Padma Talwalkar was a true eye opener. 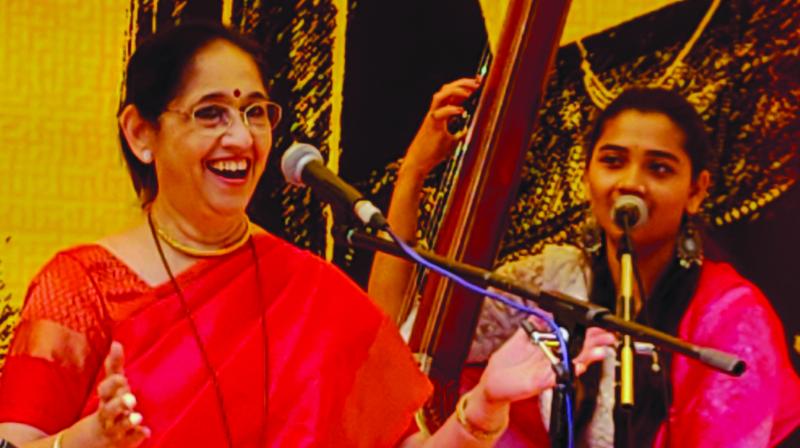 Six years ago, in November 2014, the India Habitat Centre in New Delhi decided to initiate an outdoor morning monthly concert in the winter months. Their open-air amphitheatre lay largely unused in the mornings; plus regular morning concerts are a rarity in New Delhi. The huge plethora of morning ragas remain unheard. These start with the pre-dawn/dawn ragas of Lalit, Ramkali, Gunkali, and other ragas in the Bhairav family.

Bhairav has various variants and is also combined with other ragas like Ahir Bhairav, Nat Bhairav, Shivmat Bhairav, Bairagi Bhairav to name a few. After Raga Bhairav, an early morning raga is Todi; again there are said to be 12 original variants. After the Todis come the pre-noon ragas, the 12 Bilawals. Sarangs, again traditionally 12 in number, are also to be sung after noon.

One never gets to hear these beautiful ragas, as in the North the time theory of raga presentation is still strictly adhered to. As such, the India Habitat Series Morning Ragas series is eagerly awaited. In the past, greats like Ustad Amjad Ali Khan, the late Vidushi Girija Devi, Ustad Nishat Khan, Pandit Tejendra Narayan Mazumdar, Ustad Wasifuddin Dagar and Vidushi Shubha Mudgal have performed. A recent innovation is inviting Carnatic musicians — Vidushis Sudha Raghnathan and Bombay Jayashri have sung too. The pleasant greenery flanking the stage, the slowly emerging welcome sun in the cold wintry mornings, and the audible cry of birds all add to the charm of the concerts.

The recent concert by Vidushi Padma Talwalkar, ably assisted vocally by her disciples Ankita Deole and Shruti Athavale, both of whom have beautiful, open voices, was a true eye opener. Padma tai is today not just a very experienced singer who has seamlessly merged different “gharanas” into her own style but today is one of the most successful Gurus we have.

Starting her vocal training for 10 years under Pandit Pimpalkhare of the Gwalior gharana to whom she attributes her ability to use notes correctly, she went on to learn from none other than Jaipur Attrauli doyen “Gaan tapaswini” Mogubai Kurdikar, and also her daughter, legendary Kishori Amonkar. After this, she went to learn from Pandit Gajananbua Joshi, who had absorbed training in three types of “gayakis” — Gwalior, Agra and Jaipur/Attrauli. Her thorough absorption and introspection of her training is manifest in her presentation which has “asar”; nowadays too much emphasis is given by younger artistes to the display of “tayyari”. The very meaning of the word “tayyari” means only to be ready — it is not the ultimate goal. Padma tai’s concert proved that the true delight one gets from classical music is not by being awestruck, but by being touched by the notes, by the ambience created by presenting a raga correctly.

She started her concert with Raga Mian ki Todi; the tantalising wait for her first touch of the elusive “Pa” after a good 10 minutes into the recital, masterly. The vilambit khayal was “ab more Rama” in teen taal, Padma Talwalkar’s slow caressing coaxing of every note and every phrase, slowly building up the structure of the raga really pleasing. The second “bandish” was the popular “langar kaankareeya ji na maaro”, and the final composition again in “teen taal” (16 beats) was one composed by Ustad Bade Ghulam Ali Khan “bhor bhayee”; with a fascinating “challan”.

Somewhat surprisingly, the second raga she sang was Raga Ahir Bhairon. She did not give in to the temptation to focus more on the lyricity of the Khamach aspect of the raga, but presented a true, wonderful Ahir Bhairon, with a deep sombre “re”. The first composition was the common “albela saajan”, and the second “nainavaa barase sajjani”. Again, one was simply swept away by the musical picture she etched with such simple passion.

The third raga was Khamach — a bhajan “Ram Bhagat Shri Hanuman”. Sung more in a classical style, as one expects from a singer of her calibre, without recourse to simplifying and lightening the presentation for easy appeal, the bhajan had a grandeur of its own. On request, she ended with a bandish thumri in Bhairavi, as a precursor to the soon to come Holi season “daaro na mope rang”.

It was wonderful to be reminded by her recital what a classical music concert should be — correct raga interpreted with wisdom, following the rules of progression creatively. There was no undue prolonging of the raga, or excessive demonstration of virtuosity to solicit applause, or use of notes lightly to appeal, which sadly are so much the norm nowadays. This was a solid masterly concert, with expert accompaniment by Pandit Vinod Lele on the tabla and Dr Vinay Mishra on the harmonium.

The next morning’s raga concert will be by Pandit Ronu Majumdar on the flute on March 1.