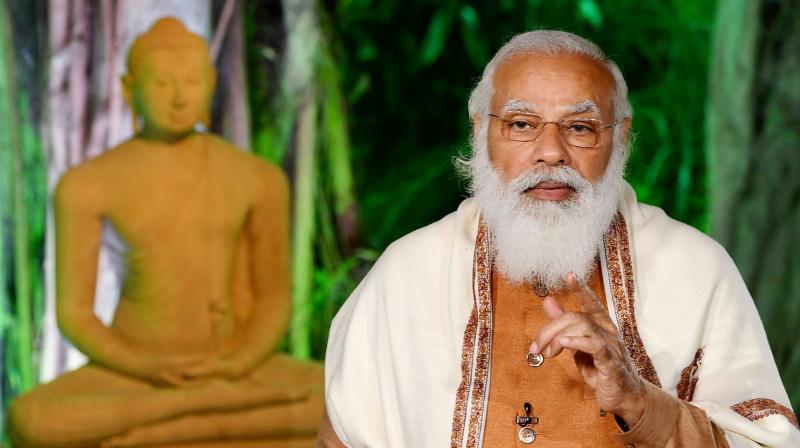 Lies are being spread that farmers will lose their lands owing to the new laws, said Mr.Modi (PTI)

New Delhi: As a controversy rages over the arrest of climate activist Disha Ravi for allegedly sharing a “toolkit” for the farmers’ agitation, Prime Minister Narendra Modi on Tuesday accused the Opposition of “spreading lies” about the three controversial farm laws.

Addressing a function after the virtual foundation stone laying of a statue of King Suheldev, seen as an icon by the “Rajbhar” (OBC) community, in Uttar Pradesh’s Baharaich district, 250 km from here, Mr Modi said the new farm laws would benefit marginal farmers the most.

“Lies are being spread that farmers will lose their lands owing to the new laws. The farmers have realised the new farm laws are for their benefit, and they are now exposing the lies of those opposing them,” he said.

The ruling BJP’s top brass, including home minister Amit Shah and party president J.P. Nadda, on Tuesday held a meeting of its leaders, MPs and MLAs, from the Jat and farmer-dominated areas of western Uttar Pradesh, Haryana and Rajasthan over the ongoing protests. Amid feedback reaching the BJP leadership that the Jat community, which is considered a strong votebank of the party, seems to be swerving because of the ongoing farmers’ protests, the BJP held this meeting and asked its leaders to “expose the conspiracy” behind the protests.

The party asked its leaders to reach out to the khaps, farmers and their families and explain how these protests are “political in nature” and “promoted” by the Left and how the Opposition is “misusing farmers”. The BJP leaders have been asked to spend at least 15-20 days “on the ground” to check the “flow of misinformation” over the laws and about the Modi government. The meeting was also attended by agriculture minister Narendra Singh Tomar and party general secretaries Arun Singh and Bhupendra Yadav.

Mr Shah, it is learnt, told the party leaders that the Leftists are perturbed with the growing support of Mr Modi, the BJP and its ideology and the protests have nothing to do with farmers and are “political in nature.”

With the epicentre of the protests against the farm laws shifting from the Delhi-Haryana border to the Delhi-UP border and the perception that the protesters are mainly from Congress-ruled Punjab also diminishing, with hundreds of farmers, mostly western UP Jats, joining the protests at the Ghazipur border, the BJP decided to reach out to the Jat community. The Jats had strongly backed the BJP during the 2014 Lok Sabha polls, which took place a few months after the Muzaffarnagar riots, and also during the 2019 Lok Sabha polls.

At the “virtual” function in UP earlier, meanwhile, Mr Modi in his 30-minute speech also accused previous governments of not honouring top leaders like Netaji Subhas Chandra Bose, Sardar Vallabhbhai Patel and Dr B.R. Ambedkar. He said the history of India was not just what had been written by those with a “slave mentality”, and that it was imbibed by ordinary people through “lok gathas”, or folklore.

As the country enters the 75th year of its Independence, it was time to remember their contribution and take inspiration from them, he added.

Tags: farm laws, modi, flow of misinformation, farmers protest, jats swerving away from bjp, bjp leaders told to reach out to khaps farmers and their families on farmers protest