70-year-old Ram Chandra Yadav was attacked and beheaded by a group of 40 to 50 men. 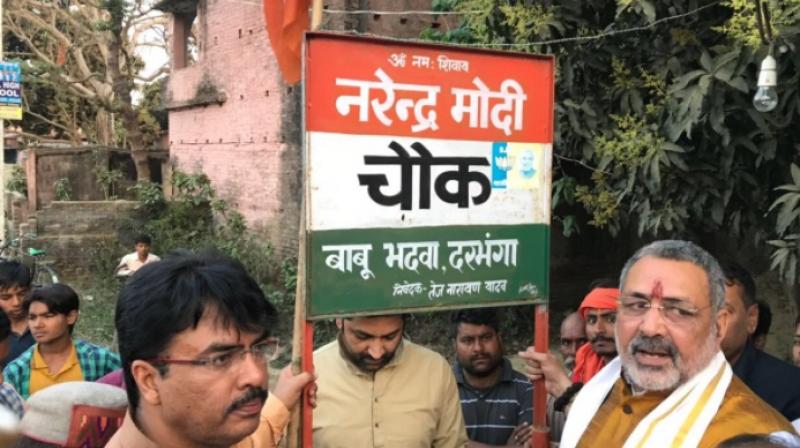 Bihar BJP Chief Nityanand Rai said, 'The dispute that escalated (and led to the murder) had started due to this chowk being named Modi Chowk.' (Photo: Twitter | @girirajsinghbjp)

Patna: Contradicting the claims of police and Bihar Deputy Chief Minister Sushil Kumar Modi, state BJP chief Nityanand Rai on Saturday said that the attempt by the Darbhanga administration to link the beheading of a 70-year-old man to a property dispute is incorrect.

"The dispute that escalated (and led to the murder) had started due to this chowk being named Modi Chowk," Rai told reporters after visiting Darbhanga in Bihar.

The Bihar BJP chief said to link the property dispute with this incident "and the attempt to cover up this case by the district magistrate and SP (district police chief) is not in accordance with the law," he said.

Ram Chandra Yadav, was attacked and beheaded by a group of 40 to 50 men.

Local BJP workers had held a protest against the killing but police officers had tried to play down the sensational attack.

In a tweet late on Friday night, Sushil Modi said it was "totally false" that the murder "was due to naming Modi Chowk".

"It was a case of land dispute. The board was put long back, murder has nothing to do with board," he tweeted on Friday night.

Nityanand Rai did not refer to the tweet but only statements attributed to district police officers.

He said it was possible that there had been a pending land dispute between the two sides.

"But that case has nothing to do with this attack... That is an older issue," he said, promising to help the family get justice.