It's a 64-year-old man with multiple health complications 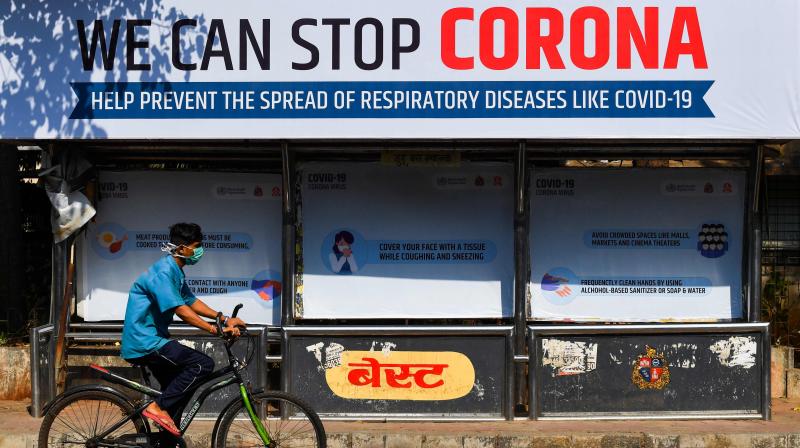 A man rides past by an awareness board displaying preventive measures against the COVID-19 coronavirus at a bus stop in Mumbai on March 16, 2020. (AFP)

New Delhi: India on Tuesday reported its third coronavirus fatality with a 64-year-old man dying in Mumbai, Health Ministry officials said as the number of positive cases rose to 125.

This is Maharashtra's first coronavirus death.

The Mumbai patient was admitted to the city's Kasturba Hospital and was suffering from multiple health issues apart from being infected by the novel coronavirus, said BMC chief Praveen Pardeshi.

Earlier, a 76-year-old man from Kalaburagi in Karnataka with a travel history to Saudi Arabia and a 68-year-old woman in Delhi died after they tested positive for the infection.

The number of novel coronavirus cases in the country rose to 125 on Tuesday after fresh cases were reported from several states. The 125 positive cases include 22 foreign nationals.

Delhi has so far reported seven positive cases while Uttar Pradesh has recorded 13 cases including one foreigner.

Rajasthan has also reported four cases including that of two foreigners. Tamil Nadu, Andhra Pradesh and Punjab have reported one case each. Odisha reported its first case on Monday.

In Haryana all the fourteen infected with the virus are foreigners while Uttarakhand has reported one case.

Kerala has recorded 24 cases including two foreign nationals. The number also includes three patients who were discharged last month after they recovered from the contagious infection with flu-like symptoms.