Dozens injured in intense clashes between students, police in Kashmir 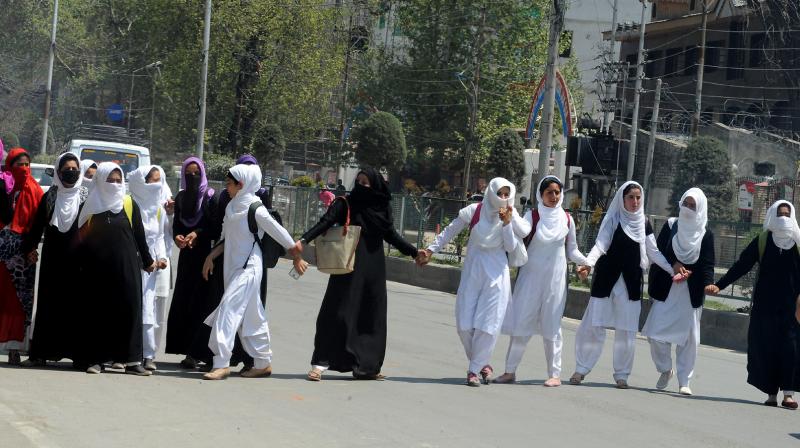 Police fired tear and smoke shells inside the Women Collage at Moulana Azad road during a protest against the forces' action on students at Pulwama Degree College last week. (Photo: DC/HU Naqash)

Srinagar: Intense clashes are underway between irate groups of students and the security forces in different towns of Kashmir, including summer capital Srinagar.

Amid heightened tensions in the wake of the daylong clashes, the authorities ordered suspension of mobile internet services in the Valley. The schools, colleges and other educational institutions have been closed and all university and other examinations scheduled for Tuesday have been postponed.

The clashes erupted on Monday soon after students took to the streets to protest against “brutal use of force” against their comrades in and outside the government-run Degree College in southern Pulwama town on Saturday.

More than fifty students had been injured in the teargas and shotgun pellet use by the security forces against the male and female students who were protesting against the police’s establishing a naka outside the campus.

The call for holding protests against Pulwama incidents had been issued by a students’ union.

The police sources and witnesses said that the students while responding to the call boycotted their classes and held protests at and outside educational institutions in Srinagar, Shopian, Kulgam, Pulwama,  Baramulla, Ganderbal and Bandipore districts. The security forces fired hundreds of teargas canisters and swung bamboo sticks to disperse the protesters, leaving over two dozen of them injured.

In Srinagar, several students of Government Women’s College at Moulana Azad Road fainted after the police fired tear and pepper gas shells into the protesters.

The clashes in Srinagar and some other parts of the Valley were on when reports last came in. Some schools including Delhi Public School at Srinagar had declared holiday on Monday in view of the growing tensions and resentment in the student community against Saturday’s incidents in Pulwama.

The students of Pulwama Degree College had alleged that the security forces not only harassed them but also barged into the college premises where they were forced them to chant slogans denouncing  the separatists and the militants and “freedom cause” and that when they protested against it the latter resorted to “brute force” against them.

A couple of videos later went viral on social media. One of them showed a student being severely beaten up by security personnel on a road, while the other showed a group of students -- one of them bleeding -- being thrashed and forced to chant anti-Pakistan and anti-separatists slogans inside a security force vehicle.

Police had claimed that a normal naka had been established around 200 meters away from the college premises. “As class work ended some miscreants started pelting stones at the naka party. To handle the stone pelting reinforcement was rushed to the spot," a statement by police had said.

“The mob swelled as more students joined and pelted stones on the forces. In this incident some miscreants and police personnel were injured. One was referred to Srinagar hospital where his condition is stable," had added.

A statement issued by the police here in the evening said that while at most places the students protested inside their college premises, at few others in Srinagar, Pulwama, Shopian and Kulgam they assembled on the roads and indulged in stone pelting thus disrupting the movement of general people and traffic.

“The police at these places exhibited maximum restraint and dispersed the stone pelting mobs of students after using some teargas shells. At some places, the college property was also damaged.  In the resultant chaos some students received minor injuries and most of them were discharged after first aid”, the statement said.

It added, “While tackling  the stone pelting  SHO Kothibag Srinagar)  and four policemen were injured  along City’s Molana Azad Road. A  lady constable had a fracture in her arm”.

Police had also said that it wants to clarify that no raids were conducted and the video being shared on social networking sites is not from Pulwama.

However, the State Human Rights Commission (SHRC) has taken cognizance of the “alleged” disproportionate use of force against students of Pulwama college. Its chairperson Justice Bilal Nazki has while taking cognizance of the matter directed Superintendent of Police Pulwama to file a detailed report on the incidents within two weeks, a spokesman of the commission said.