The resolution, however, was silent on core issues like Ram Mandir, Article 370 and Uniform Civil Code. 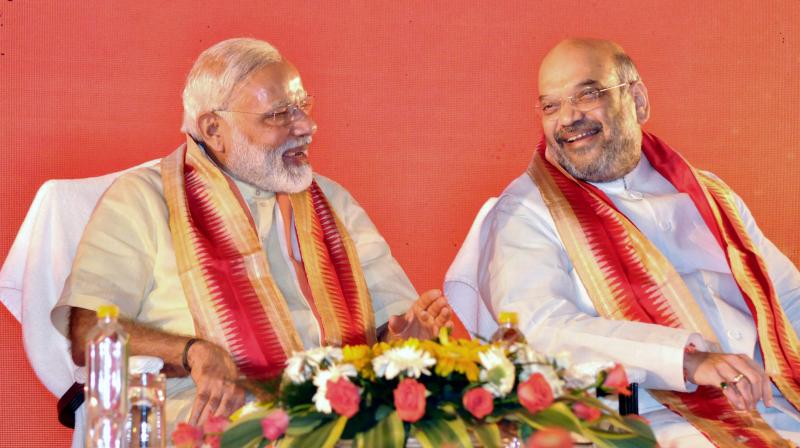 Bhubaneswar: The BJP’s political resolution adopted at its two-day National Executive meet on Sunday urged countrymen to support Prime Minister Narendra Modi to form the next government in 2019 to continue his good work and build his dream “New India” by 2022, when India will be observing its 75th anniversary of Independence.

“Prime Minister Narendra Modi has taken the country to new heights in all development parameters. The people’s trust on the Union government and his leadership has increased; the country has progressed on all fronts. This was all possible because of the hard work of the Prime Minister in the last three years of his tenure,” the resolution said. The resolution further read: “The BJP calls upon people of India to take a pledge to form a government under the leadership of Narendra Modi in 2019 to have the continuity of development and welfare policies.” The resolution urged upon the party leaders and workers to work hard to win the confidence of more and more people. The resolution underlined various programmes undertaken by the NDA government to improve the standard of living of women remote villages and poor household.

“The Central government has given around two crore free LPG connections under the Ujjawala Scheme. In the field of electrification also, the government has done a wonderful work by providing power to 12,586 villages. The government has already distributed about 11.8 crore LED bulbs,” the resolution said.

The resolution, however, was silent on core issues like Ram Mandir, Article 370 and Uniform Civil Code.

No mention of the ban on cow slaughter was also made in the resolution. The resolution said under PM Modi, India’s goodwill had increased globally.

“The entire world is now looking towards India. India under Modi’s leadership has emerged as a land of prospects. India’s relations with all the countries in the world have improved,” it said.