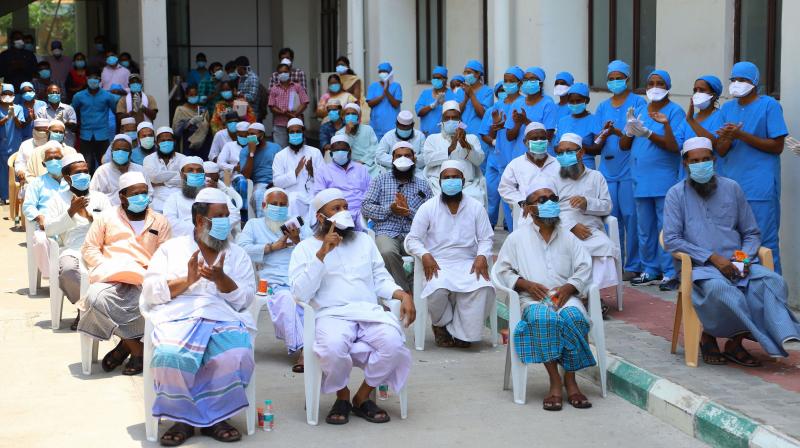 Chennai: Sorry to say, the coronavirus count did not fall in Tamil Nadu today, as hoped for by chief minister Edappadi Palaniswamy yesterday when he was enthused by the dwindling numbers seen this week. But fresh positives increased again by 56 today, indicating there was nothing to it.

So Tamil Nadu is still third in the country, with 1,323 coronapositive cases. Deaths remain at 15.

The 56 new positives were  boosted by a surprising surge of 17 new cases from Thanjavur district, followed by Chennai with 11, Tiruvallur and Tenkasi districts with 5 each and Tiruchy 3.

So hope had to be found elsewhere: As per updated figures released by the Department of Public Health and Preventive Medicine, there were 103 discharges of recovered patients today, a record for a single day so far. This takes the total number of discharged patients to 283.

Friday's discharges contained a warm story. They included a 25-year-old woman, who attracted a lot of media attention as the Chennai shopping mall worker who took ill and then tested Covid-19 positive. Friday marked the end of her month-long quarantine at the Ariylaur Government Medical College Hospital and she was given a send-off with bouquets and fruits by smiling nurses, policemen and revenue babus.

The sudden surge of positive cases from Thanjavur was a concern though. It is being attributed to the arrival of test results of 17 of the 47 persons kept in isolation at the Government Engineering College at Sengipatti near that ancient town. These people were relatives and contacts of one corona-infected patient now being treated at the Thanjavur Government Medical College Hospital. The swabs found 17 of them positive for the virus and 30 negative.

In Salem, chief minister Palaniswamy said the state received 24,000 rapid test kits from China on Friday, news agencies reported. This was part of an order of 1.25 lakh kits that were apparently commandeered to the US last week.