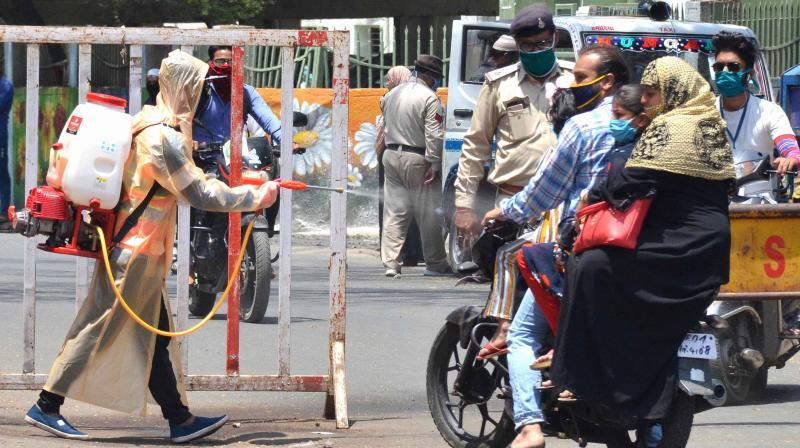 A BMC employee disinfectant on a bike in Bhopal. PTI photo

Indore: Four persons, including two COVID-19 patients, who had escaped from an isolation facility in Madhya Pradesh's Indore city in a truck, were nabbed at Morena district, police said on Friday.

Eight people, including six coronavirus patients and two suspects, had escaped from an isolation facility set up at a hotel in Indore on Wednesday, of which three COVID-19 patients were later traced and hospitalised.

The remaining four, who wanted to return to their home state Uttar Pradesh, were caught on Thursday night at the border district of Morena, additional city superintendent of police (CSP) Puneet Gehlot said.

All occupants of the truck, including the four escapees, the driver and cleaner of the Uttar Pradesh- registered vehicle, were placed under medical watch and tested, he said.

The four escapees were booked under relevant sections of the Indian Penal Code, he said, adding that a manhunt was launched to nab the last coronavirus patient who is still at large.

Meanwhile, Central Kotwali police station in-charge B D Tripathi had earlier said six of the escapees were staying at a lodge near Ranipura area of Indore, while two were residing at a 'musafirkhana' (kind of a lodge).

"Since the local administration declared Ranipura as the epicentre of coronavirus in Indore, we had sent several people, including these eight, from the area and adjoining localities to the isolation facility," he said.