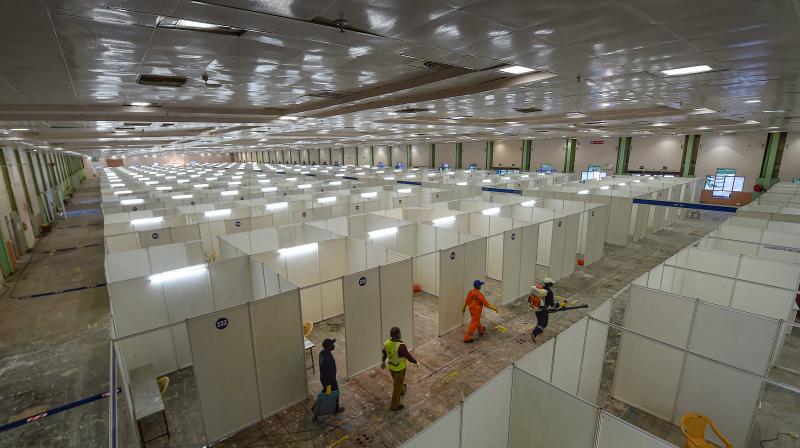 Chennai: Only 25 fresh cases of coronavirus infections were recorded in Tamil Nadu on Thursday. There had been 38 on Wednesday; 31 on Tuesday; 98 on Monday; and 106 on Sunday.

This dwindling sequence of numbers formed the basis for much optimism expressed by the state's chief minister Edappadi Palaniswamy this evening.

Although Tamil Nadu remains the state with the third highest number of coronavirus positive cases on hand (1267), and a death toll of 15 (one today), the chief minister said the state would hit "zero level" in the next three days and 'turn negative' thereafter, meaning there would be fewer new arrivals and more discharges from quarantine facilities.

The press conference was an elaborate affair following a video-conference Palaniswami held with district collectors and top-level officials. It was remarkable for the length to which the chief minister went to defend his government's performance and hold out hope for the days immediately ahead.

It was also notable for one nimble leap of logic: Palaniswamy pledged a solatium of Rs 5 lakh to any journalist who dies in the line of duty due to a corona infection, but declined to extend that sop to other victims. Why? Because the novel coronavirus, "a rich man's disease", did not originate in Tamil Nadu and was largely spread by travellers coming into India from abroad. So the question does not arise.

But largely, the presser was a get-back at criticisms levelled by DMK leader M K Stalin and a few others that Tamil Nadu did not act early and fast enough against the outbreak.

"In fact, we have been all along doing what they (the opposition) have been demanding, including movement restrictions under Section 144 Cr.P.C," he quipped.

There were enough stocks of drugs and beds to treat patients and 27 testing labs (ten at private hospitals, and 17 in government hospitals) that can test up to 5,590 samples per day.

There was an elaborate containment plan (CP) under which 85.07 lakh people have been screened for coronavirus symptoms, and continuous monitoring was being carried out of all those under quarantine; besides, the State has issued orders to procure another 35,000 PCR kits, 2,571 ventilators and five lakh RTKs.

All these facts show that the opposition's criticisms are baseless," Palaniswami said.

Palaniswami also elaborated the economic relief measures to a large section of the people including a Rs.1,000 cash dole to unorganised sector workers. He said another 8.60 lakh workers in the informal sector have also been added now, apart from those under various welfare boards.

He said 13,407 migrant workers from other states have been staying in 311 places and their needs taken care of, besides of differently-abled, destitute, aged persons and others. The community kitchens set up for the poorer sections across the state have ensured that 1.80 lakh persons have access to food every day.

"So, nobody is going hungry in Tamil Nadu," he asserted.