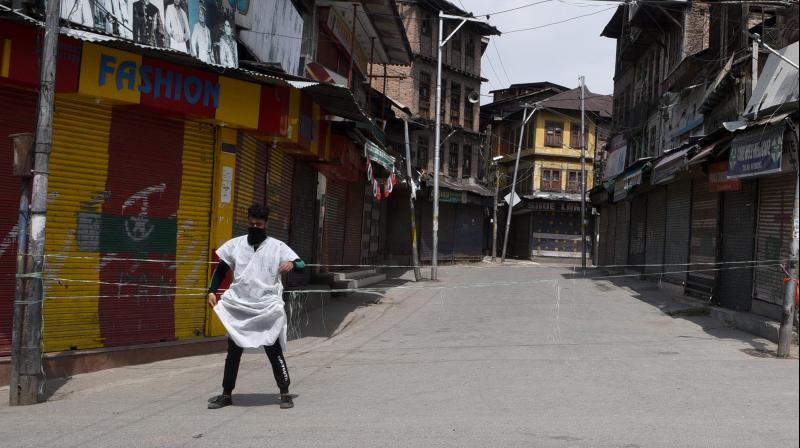 a man stands guard to restrict the entry of outsiders to their locality. Several localities in Srinagar have been declared red zones and severe containment measures have been taken up. (DC Photo: H U Naqash)

Srinagar: Jammu & Kashmir on Friday recorded its fifth COVID-19 death whereas the number of patients shot up to 328 after 14 more tested positive later in during the day.

The latest victim of the pandemic was a 75-year-old resident of northwestern Sopore town. Doctors at Srinagar’s Sher-i-Kashmir Institute of Medical Sciences (SKIMS), where he had been admitted after testing COVID-19 positive last week, said that he had already been suffering from several ailments including chronic obstructive pulmonary disease (COPD asthma) besides being hypertensive.

Confirming detection of 14 new cases, an official spokesman in Jammu said all these patients were residents of the Kashmir Valley. He said that out of 328 positive cases, 281 are active positive whereas 42 have recovered and five have died so far. Four of the patients were discharged from Srinagar’s government-run Chest Disease Hospital on Friday after their recovery, doctors said.

The spokesman added that till date as many as 59,205 travellers and persons in contact with suspected cases have been put under surveillance, which include 7,631 persons in home quarantine including facilities operated by government, 281 in hospital isolation, 260 in hospital quarantine and 27,366 under home surveillance. Besides, 23662 persons have completed their surveillance period. Seventeen COVID-19 patients are receiving treatment at a hospital in Ladakh’s main town Leh. However, the doctors have claimed that most of them are recuperating fast.

Meanwhile, police arrested about three dozen people in various parts of the Valley on charges of violating the virtual lockdown which entered its 30th day on Friday. The police said that among them is an imam who organised Friday congregational prayers in a mosque in Srinagar’s Batwara area.