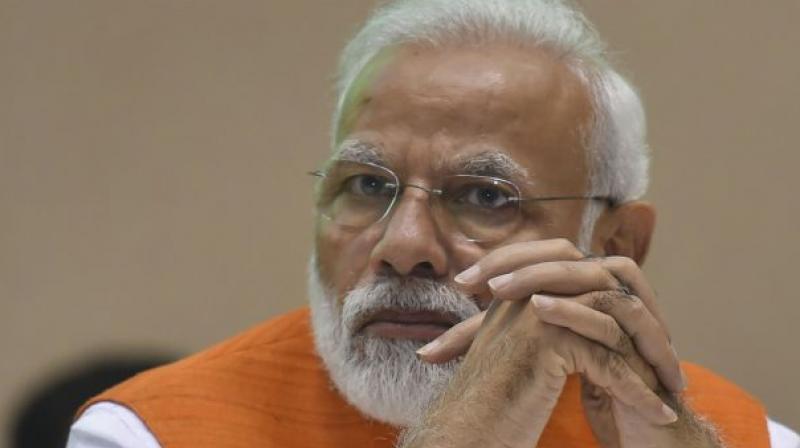 India decided to import 50,000 metric tonnes of medical oxygen to reduce the shortage of supplies. — PTI

New Delhi: As the daily fresh Covid-19 cases went over 2.17 lakhs and the death toll reached 1,185, Prime Minister Narendra Modi on Friday chaired a comprehensive review meeting to ensure adequate medical grade oxygen supply in the country. The meeting took place a day afte. Union minister Prakash Javadekar and Karnataka CM B.S. Yediyurappa were, meanwhile, among those who tested positive on Friday. Mr Yediyurappa has in fact tested positive for the second time in eight months and has been hospitalised.

In the wake of the nationwide surge in Covid-19 cases, the Council for the Indian School Certificate Examinations on Friday deferred the ICSE Class 10 and ISC Class 12 examinations till further notice. This comes two days after similar action by the CBSE board.

During Friday’s meeting, the PM reviewed in detail the current oxygen supply situation and projected use in the coming 15 days across 12 high-burden states -- Maharashtra, Madhya Pradesh, Gujarat, Uttar Pradesh, Delhi, Chhattisgarh, Karnataka, Kerala, Tamil Nadu, Punjab, Haryana and Rajasthan. The PM was informed that 4,880 MT, 5,619 MT and 6,593 MT have been allocated to these 12 states for meeting their projected demand as on April 20, April 25 and April 30 respectively. The PM suggested an increase in the oxygen production capacity of each plant. The use of surplus stocks of oxygen in steel plants for medical use was also discussed.

The PM urged officials to ensure seamless and free movement of tankers carrying oxygen throughout the country. The government has exempted all inter-state movement of oxygen tankers from registration of permits to enable easier movement. The PM was told that states and transporters had been asked to ensure tankers move around the clock, with drivers working in shifts to ensure a faster turnaround, and adequate capacity to meet the surge in demand. Cylinder filling plants will also be permitted to operate for 24 hours, with the necessary safeguards. The government is allowing industrial cylinders to be used for medical oxygen after due purging. Similarly, nitrogen and argon tankers will be automatically allowed to be converted to oxygen tankers to overcome the potential shortage of tankers.
The Centre has also decided to double the production of indigenously-made Covaxin by May-June and nearly 10 crore Covaxin doses will be produced per month by September.

The Union ministry of science and technology said the capacities of Bharat Biotech Ltd in Hyderabad as well as other public sector units are being upgraded and financial aid is being provided as a grant to the tune of around Rs 65 crores to Bharat Biotech’s new Bengaluru facility, which is being repurposed to increase the capacity of vaccine production. Besides, three PSUs are also being supported to hike the capacity of vaccine production. These are Haffkine Biopharmaceutical Corporation Ltd, Mumbai, which will be able to produce 20 million doses per month; Indian Immunologicals Ltd, Hyderabad, and Bharat Immunologicals and Biologicals Ltd based in UP’s Bulandshahar.

On Friday Union home secretary Ajay Kumar Bhalla and health secretary Rajesh Bhushan reviewed the Covid-19 situation in Chhattisgarh and Uttar Pradesh. These two states, along with Maharashtra, are the three states that have over one lakh active cases. Both Chhattisgarh and UP are reporting a very high number of daily new cases and high deaths due to Covid-19.

The three states have been advised to increase the number of isolation beds, oxygen beds, ventilators/ICU beds, ambulance fleet as per needs, plan for adequate oxygen supply; and focus on mortality reduction by early identification of positive cases and adherence to national treatment protocols. Prohibiting unnecessary travel and crowding in public places through strict and effective enforcement was stressed upon.

All states have been advised to make use of the hospitals of key Central institutions, the Indian Railways and public sector units for treating Covid-19 patients.

The ICMR has recommended setting up more testing labs, including mobile labs, in the affected states.  He also advised keeping a vigil and ramping up testing on a continuous basis in districts showing more than a five per cent positivity rate. The affected states were asked to ramp up RT-PCR testing, have timely tracing, containment and surveillance activity to curb the chain of transmission, and strict implementation of containment measures and encourage 100 per cent vaccination of eligible population groups, especially in high-focus districts.

The Union health ministry has said various mutations of the Covid-19 virus were found in many countries, including India, besides the UK (17 mutations), Brazil (17 mutations) and South Africa (12 mutations) variants. These variants have higher transmissibility. The UK variant has been found extensively in the UK, all across Europe and has spread to Asia and America. The double mutation (2 mutations) is another variant and has been found in several countries like Australia, Belgium, Germany, Ireland, Namibia, New Zealand, Singapore, United Kingdom, USA. The higher transmissibility of this variant is not established as yet.