India   All India  17 May 2018  Amid concerns over poaching, Cong-JD(S) to fly MLAs out of Karnataka
India, All India

Amid concerns over poaching, Cong-JD(S) to fly MLAs out of Karnataka

Congress has alleged that one of its MLAs -- Anand Singh -- has been threatened and pressurised to defect. 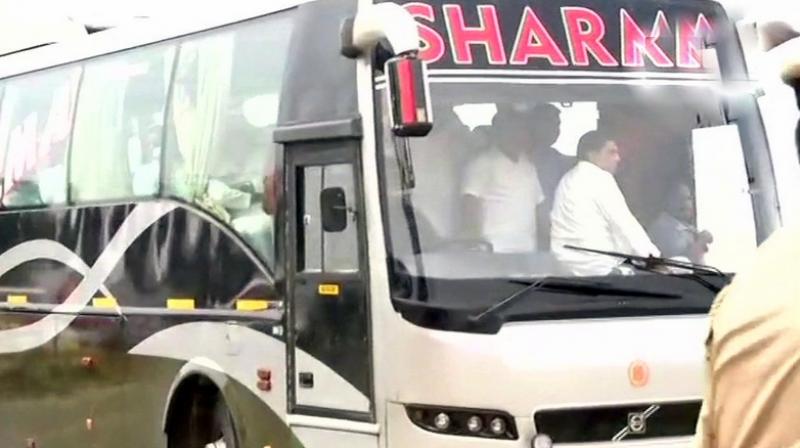 Congress that had moved its legislators to Eagleton resort near Bengaluru on Wednesday has now decided to move them out of Karnataka, say reports. (Photo: ANI/Twitter)

Bengaluru: Karnataka is witnessing a high-voltage political drama since the last two days. On Thursday, BJP’s B S Yeddyurappa took oath as the chief minister of the state hours after the Supreme Court rejected a petition filed by the Congress and ally JD(S) seeking a stay on the ceremony.

Yeddyurappa, who had been sworn in as chief minister of a minority government, now has 15 days to garner support of 8 MLAs to reach the half-way mark.

Amid all these developments, there is a fear in the Congress leadership that BJP may succeed in poaching some of its newly-elected MLAs.

It’s not only the Congress, but top leaders of its ally JD(S) are also worried over the issue.

The two parties, which together have 116 MLAs, are trying to protect their flock for 15 days.

Congress that had moved its legislators to Eagleton resort near Bengaluru on Wednesday has now decided to move them out of Karnataka, say reports.

The MLAs are likely to be taken to Cochin in Kerala.

The JD(S) has reportedly also decided to fly out its lawmakers, a report in NDTVsaid. The party’s lawmakers spent the night at the Shangrila hotel in Bengaluru.

The Congress has alleged that one of its MLAs -- Anand Singh -- has been threatened and is under pressure to defect.

Congress MP D K Singh had confirmed that Anand Singh has been missing from all meets and protests since Wednesday.

Karnataka JD(S) chief H D Kumaraswamy told media that Anand Singh is being pressurised to switch sides to the BJP with the bogey of an Enforcement Directorate (ED) case that is going on against him.

Kerala tourism, in a light-hearted dig on Wednesday, offered Karnataka's newly-elected lawmakers to the "safe and beautiful" resorts of God's Own Country.

"After the rough and tumble of the #KarnatakaVerdict, we invite all the MLAs to unwind at the safe & beautiful resorts of God's Own Country," Kerala Tourism tweeted on Tuesday.