Opposition says there can't be 2 sets of rules, one for the BJP and the other for everybody else. 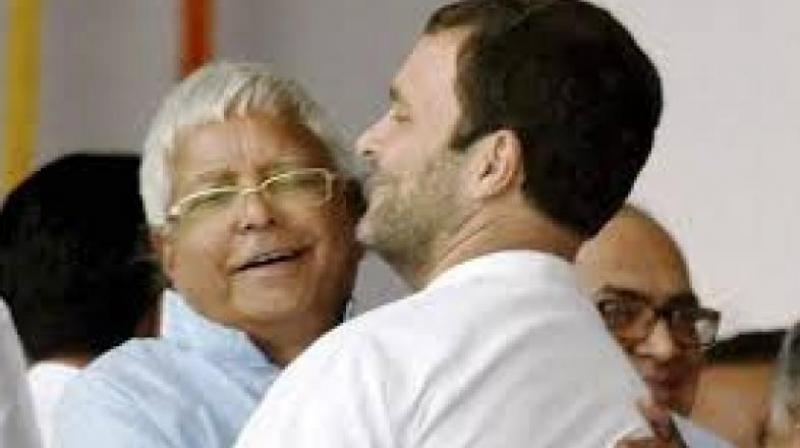 RJD said they will hold day-long dharna on Friday against murder of democracy in Karnataka. (Photo: File/PTI)

Panaji: Seeking adoption of the Karnataka example in Goa, the Congress on Thursday decided to stake claim to form government in Goa where it had emerged as the single largest party in the Assembly polls held in 2017.

In the Goa Assembly elections held in March 2017, the Congress had bagged 17 seats in the 40-member House, falling short of the majority figure by four seats. The BJP, which got 14 seats, formed the government in alliance with Goa Forward Party and MGP, both of which had secured three seats each. Three Independents also went with the BJP.

Kavlekar said the Goa Governor should follow the precedent set by her Karnataka counterpart and invite the single largest party to form the government "correcting her mistake of March 12, 2017".

He was referring to the decision of Karnataka Governor Vajubhai Vala to invite the BJP to form the government after the Karnataka Assembly election results declared on Wednesday.

Meanwhile, Rashtriya Janata Dal (RJD) leader and son former chief minister of Bihar Lalu Yadav, Tejashwi Yadav said, "We would be holding a 1-day dharna tomorrow (Friday) against the murder of democracy in Karnataka. We also request the Bihar Governor to dissolve the state government and like in Karnataka invite the single largest party, which in Bihar is the RJD."

The BJP, which emerged as the single largest party with 104 seats in the 222-member Karnataka Assembly, was invited by the governor despite the JD(S)-Congress combine staking claim by citing the support of 117 MLAs. The majority mark is 112 seats.

Kavlekar further said, "We have 16 legislators with us and with that strength we are the single largest party in the (Goa) Assembly. The governor should invite us to form the government in Goa as per the precedent set by her Karnataka counterpart."

When pointed out that the Congress needs support of at least 21 legislators to stake the claim, he said that once the governor swears in the Congress chief minister, he will be able to prove his majority on the floor of the House.

"The numbers will have to be proven on the floor of the House and we have that with us," he said. However, he did not specify how the party would muster the majority.

Goa Congress chief Girish Chodankar said that the governors can't have two different set of rules. "While in Karnataka the governor has invited single largest party, in Goa too, the same precedent should be followed," he said.

The Congress is giving an "opportunity to Goa governor to rectify the mistake which she did last year", Chodankar said.

The BJP-led government in Goa is headed by Manohar Parrikar, who is currently undergoing treatment in the US for his pancreatic ailment. Kavlekar said that in absence of the chief minister in the state since last two months, there is no government in place. "The Congress will be able to provide a stable government in Goa," the CLP leader added.