Congress president lashed out at the BJP-led government at the Centre, saying Constitution was under 'severe attack'. 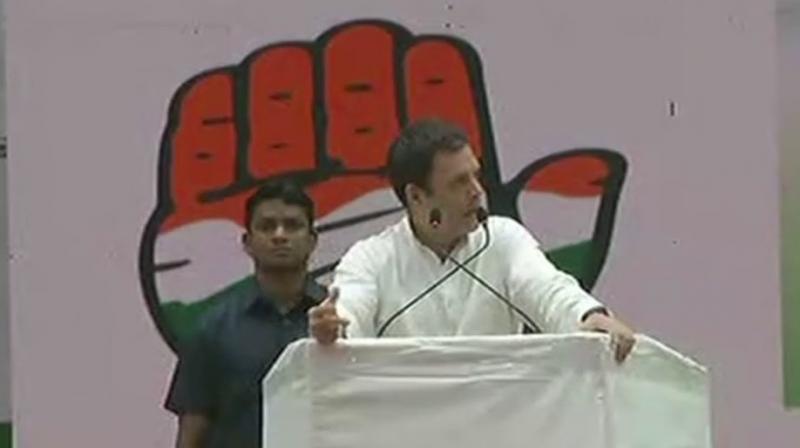 Raipur: Against the backdrop of the political developments in Karnataka, Congress president Rahul Gandhi on Thursday lashed out at the BJP-led government at the Centre, saying Constitution was under "severe attack" in the country where an atmosphere of fear prevailed.

The Congress President said, "RSS is making way into all institutions in the country. Aisa Pakistan ya tanashahi mein hota hai (Such things happen either in Pakistan or in an autocratic regime)."

Addressing a 'Jan Swaraj Sammelan' on the occasion of the silver jubilee of 73rd and 74th amendment in the Constitution related to local self-governance, Gandhi accused the BJP and the RSS of capturing every democratic institution in country.

Referring the press conference called by Supreme Court judges on various issues relating to the apex court judiciary earlier this year, Gandhi said, "The judiciary is under fear, the press is under fear and even the BJP's members of Parliament are under the same fear as they cannot speak a single word before the prime minister (Narendra Modi)."

"The Constitution is under severe attack in the country. In Karnataka, the MLAs are on one side and the governor on the other," he alleged, adding,

"One after another, you can see every democratic institution in the country, like the MPs, MLAs, the press and the Planning Commission...the RSS is trying to induct its people."

The comments came against the backdrop of the dramatic developments that took place in Karnataka after the Assembly election there threw up a hung verdict.

BJP legislature party leader B S Yeddyurappa was today sworn in as the chief minister of Karnataka for a second time, after an overnight high-voltage legal battle in the Supreme Court which refused to stay his swearing-in.

Yeddyurappa has 15 days to prove his majority in the Assembly. The BJP has 104 MLAs in the House, eight short of the magic figure of 112.

On the other hand, the Congress and JD(S), which have already announced post-poll tie-up, have won 78 and 37 seats respectively.

Prior to his address in Raipur, Gandhi, in a tweet, had hit out at the BJP over its "irrational insistence" to form government in Karnataka despite "not having the numbers" and said that while the saffron party will celebrate its "hollow victory", India will mourn the "defeat of democracy".