India   All India  17 May 2021  Now, painless restraints for captive tuskers
India, All India 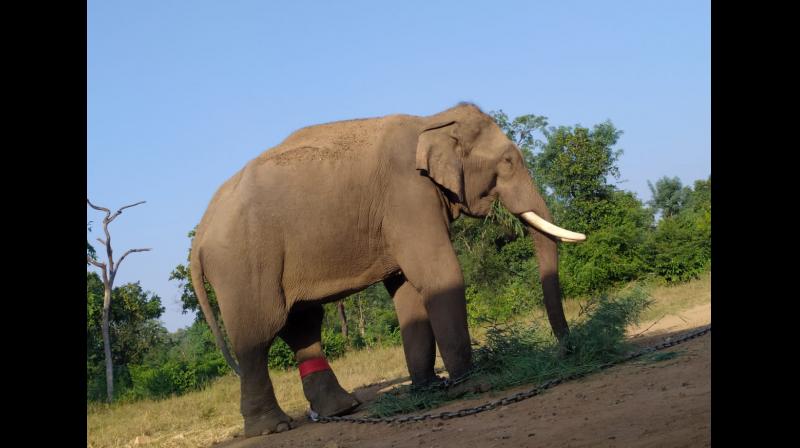 Industrial strength belts, capable of handling loads of more than 5 tonnes, are being used on the legs of elephants. (Image sourced)

Hyderabad: A simple device, designed using high-strength woven belts as restraints to limit the movement of captive elephants used in wildlife rescue operations in Maharashtra, has resulted in elimination of painful injuries on the legs of pachyderms caused by traditional steel chains used as restraints.

Industrial strength belts, capable of handling loads of more than 5 tonnes, are being used on the legs of elephants. These belts, connected to a shackle, are linked to steel chains that afford the animals some space to move. “Though the elephants we use are trained, as with all captive elephants, these ones which we use in operations to tranquilise wild animals including tigers, are tied to chains. But in the past, the chains were wrapped around the legs directly. It was quite common for the elephants to develop wounds because the chains would begin biting into their skins,” Dr Ravikant Khobragade, a wildlife veterinarian working in the Tadoba Andhari Tiger Reserve in Maharashtra, told this newspaper.

There was once an incident of an elephant in ‘musth’, a state when it is high on testosterone and began pulling the chain on its leg leading to a deep cut and nasty injury and the elephant also killed a mahout, he said. Captive elephants that are chained and frequently suffer from wounds from steel chains that bite into their legs, and the device Khobragade designed has made it safer for elephants. Khobragade, incidentally, is the wildlife vet on call for any possible capture of tiger A2, a wandering big cat from Maharashtra that in November and December last killed two tribals, a young man and a girl, in Asifabad district of Telangana.

“The animals are no longer irritated by the steel chains on their legs. The mahouts too are happy,” he said, about the new belt restraints being used for five elephants in Tadoba tiger reserve, and a few more in other tiger reserves in Maharashtra. Several states have captive elephants to help in rescue, or tranquilising of wild animals that might stray into human habitations, or need to be captured for other reasons.