The police are on high alert after Friday's violence and arson and security forces are conducting route marches in various parts. 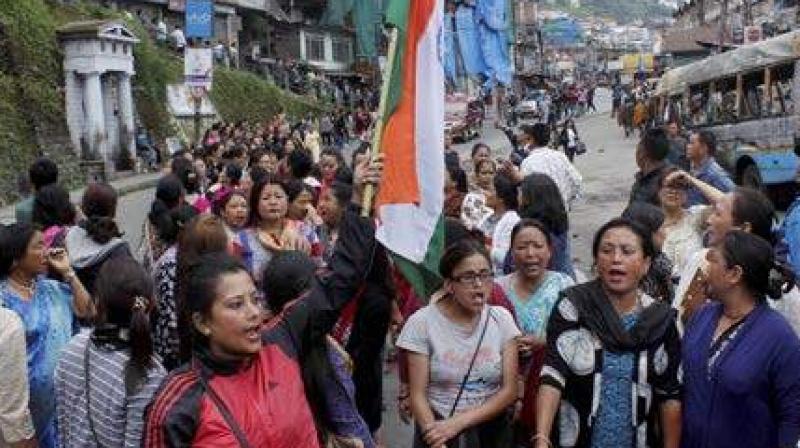 Members of Gorkha Janmukti Morcha during a strike in Darjeeling Hills. (Photo: PTI)

Darjeeling (WB): Police arrested Vikram Rai, son of Gorkha Janmukti Morcha (GJM) MLA Amar Rai from his residence following an attempt by some party supporters to torch a PWD office in Bijanbari area in Darjeeling. Vikram is in-charge of the GJM's media cell.

A raid at GJM's Assistant General Secretary, Binay Tamang's house was conducted last night. Leaders of the Gorkha Janmukti Morcha, who are spearheading an agitation for a separate state were arrested by the police.

Meanwhile, shops, hotels and other business establishments, barring pharmacies, remained closed on the third day of the GJM-sponsored indefinite shutdown in the Darjeeling hills.

The police are on high alert after Friday's violence and arson. Security forces are conducting route marches in various parts of the hills.

#Darjeeling: Police use tear gas during GJM's protest against the raid at residence of Assistant Gen Secy of GJM & on #Gorkhaland issue pic.twitter.com/pBvRWW99Hn

The indefinite bandh was called after the police on Thursday raided the premises of GJM chief Bimal Gurung.

The GJM had earlier called a shutdown of the offices of state government and the Gorkhaland Territorial Administration, which its controls.

The Centre  decided to put on hold the dispatch of additional paramilitary forces to Darjeeling as the state is yet to send it a report on the ground situation.

The turmoil, which was set off by the state government's announcement on introduction of compulsory teaching of Bengali language in schools, has begun impacting daily life in the hills with schools, markets and even bank ATMs shut.