Delhi BJP Prez Manoj Tiwari said that it was 'unfortunate' that the CMs of 4 states let themselves be a part of the AAP supremo's 'drama'. 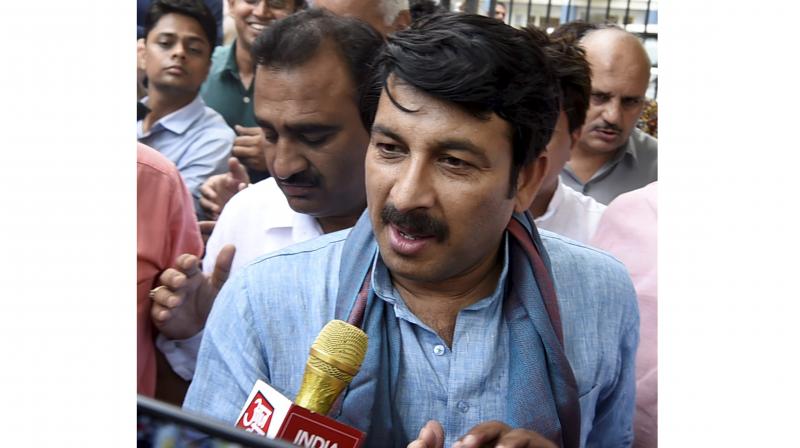 Delhi BJP chief Manoj Tiwari said that the dharna was a bid to form an 'anti-BJP, anti-Narendra Modi' front in the run-up to the 2019 Lok Sabha election. (Photo: File/AP)

New Delhi: The Delhi Bharatiya Janata Party (BJP) on Sunday accused Chief Minister Arvind Kejriwal of resorting to a "political stunt" in a bid to form an "anti-BJP, anti-Narendra Modi" front in the run-up to the 2019 Lok Sabha election.

Delhi BJP chief Manoj Tiwari also said it was "unfortunate" that the chief ministers of four states allowed themselves to be a part of the Aam Aadmi Party (AAP) supremo's "drama".

Leader of Opposition in the Delhi Assembly Vijender Gupta, who is sitting on an indefinite hunger strike at the chief minister's office in the Delhi Secretariat, wrote an "open letter" to Kejriwal, asking him to look beyond "political interests" and resume work, along with his ministers.

"The (press) conference held by the chief ministers of four states in your favour ends all doubts of your dharna being nothing more than a political stunt to rally together an anti-BJP, anti-Modi front before the elections next year," Gupta wrote in the letter.

West Bengal Chief Minister Mamata Banerjee, her Kerala counterpart Pinarayi Vijayan, Karnataka Chief Minister H D Kumaraswamy and Andhra Pradesh Chief Minister N Chandrababu Naidu tried to meet Kejriwal at the Lieutenant Governor’s office in Delhi, where he is sitting on an indefinite dharna, along with some his cabinet colleagues, but were denied permission.

Tiwari accused Banerjee of first trying to delay the NITI Aayog meeting on the "pretext" of Eid celebrations in her state and then being a part of Kejriwal's "tamasha".

"First @MamataOfficial asks Niti Ayog to delay its meeting by a day on the pretext of Eid celebrations in Bengal but lo and behold she is now participating in petty politics of #DharnaTamasha In Delhi (sic)," he tweeted.

Earlier, Tiwari had asked the four chief ministers, who are here for the NITI Aayog governing council meeting on Sunday, to advise Kejriwal to focus on the problems being faced by the people of Delhi.

"This is so unfortunate that the 4CMs have allowed themselves to be part of this #DharnaTamasha. Infact they should advise CM Delhi @ArvindKejriwal to focus on resolving severe Drinking Water Crisis which the people of Delhi are now facing, earn the confidence of Delhi officers (sic)," he had tweeted.