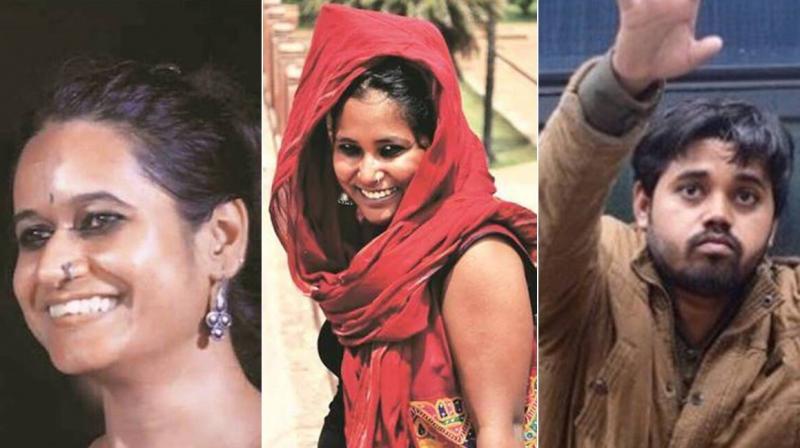 NEW DELHI: A day after the Delhi High Court allowed the bail of three student activists — Natasha Narwal, Devangana Kalita and Asif Iqbal Tanha — the Delhi Police has challenged the order in the Supreme Court, calling it “perverse”. The Delhi Police’s appeal claims that the high court judges crossed their jurisdiction in bail matters by conducting a “mini trial” and had gone overboard with their comments on “dissent not amounting to terrorist act” without realising its impact on pending trials under the UAPA and cases being investigated by the National Investigation Agency (NIA).

While granting bail to the three activists, arrested under the Unlawful Activities Prevention Act (UAPA) in connection with last year’s anti-CAA protests, the high court had on Tuesday held that a protest does not amount to a “terrorist act”.

The high court order, which came as a major blow to Delhi Police, concluded that the accused had taken part in a protest against CAA that was lawful and was monitored by law enforcement agencies.

The three student-activists, however, remained in jail on Wednesday as the police claimed procedural delays in verifying their sureties and addresses.

In three separate orders on Tuesday, the high court had granted regular bail to them till conclusion of trial on each furnishing a personal bond of Rs 50,000 and two sureties. They were also asked to surrender their passports and intimate the police about their place of residence.

The high court order said that the right to protest is constitutionally guaranteed under Article 19(1)(a) and cannot be termed as a terrorist act within the meaning of Section 15 of the UAPA.

Within 24 hours of the high court order, Delhi Police filed its appeal in the apex court through lawyer B.V. Balram Das, terming the judgment “perverse”, and in a Delhi sessions court, which is to sign the final release order of the three student activists, the police said on Wednesday that it needs time to verify the outstation permanent addresses of Ms Narwal, Ms Kalita and Mr Tanha for the purpose of their release.

In the sessions court, while seeking time to file the verification report for the release of the three student-activists, the police said that since Mr Tanha, Ms Narwal and Ms Kalita are permanent residents of Jharkhand, Assam and Rohtak respectively, it requires time June 18, 19 and 21 respectively to verify the three addresses.

Additional sessions judge Ravinder Bedi has reserved the order in the plea moved by the student-activists seeking their immediate release from Tihar jail. During the course of hearing, the sessions court abruptly removed all the media persons attending the proceedings from the virtual hearing link.

A defence lawyer said that the student activists were arrested from their residences in the city, which are listed in police’s documents.

"Our work is to submit the bail bond. The high court order is clear... accused have to be released within 24 hours once they submit a bail bond… We have done our work. Can't be in jail because police haven't done their work,” their lawyer said.