In the latest ceasefire violations by Pakistan in twin districts of Poonch and Rajouri and Uri sector of the Kashmir Valley. 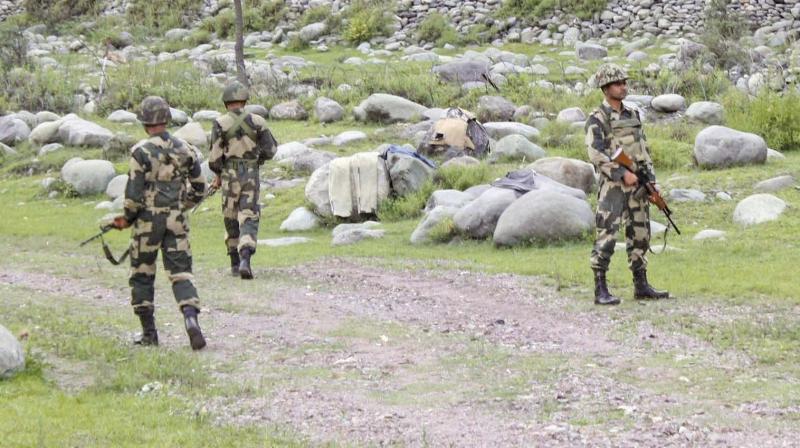 Jawans keep vigil at Poonch in J&K on Tuesday, a day after ceasefire violation by the Pakistani Army. (Photo: PTI)

Srinagar: India and Pakistan Directors General of Military Operations (DGMOs) on Monday spoke to each other over the hotline as clashes between the armies on the Line of Control (LoC) intensified.

In the latest ceasefire violations by Pakistan in twin districts of Poonch and Rajouri in Jammu region and Uri sector of the Kashmir Valley, one Indian soldier and an 8-year-old girl were killed and two civilians and a soldier were injured on Monday.

Several Army vehicles and a shelter caught fire as the Pakistanis used mortar bombs, small arms and automatics to target the Indian positions in these sectors, officials in Jammu and Srinagar said.

Earlier on Sunday, Islamabad had reported the death of its four soldiers due to drowning in Neelan River (called Kishan Ganga in Jammu and Kashmir) in PoK’s Athmuqam sector after their vehicle was allegedly fired upon by Indian forces in alleged ceasefire violation. One civilian was injured in the firing, they said.

Heavy exchanges were reported on Monday when Pakistan's Director General of Military Operations Major General Sahir Shamshad Mirza spoke to his Indian counterpart Lt. Gen. AK Bhatt and reportedly raised the issue of ceasefire violations in the backdrop of the death of four Pakistani soldiers. The request for the DGMO-level talks was made by Pakistan.

However, Let. Gen. Bhatt rejected the Pakistani charge and said that all ceasefire violations were initiated by the Pakistani troops and that the Indian army reserved the right to retaliate appropriately.

The DGMO also reiterated that the Indian army is sincere about maintaining peace and tranquillity along the LoC.

Officials said that Naik Mudasir Ahmed and an 8-year-old Sajida Kafeel were killed in firing on Monday morning by Pakistani troops in Manjakote area of Rajouri and Balakote sub-sector of neighbouring Poonch.

The officials said that a mortar shell landed in an Army bunker at 7:30 am, killing 37-year-old Ahmed.

“He was a brave and sincere soldier who loved his job to the core,” added defence spokesman, Lt. Col. Manish Mehta.

Incidentally, Ahmed who is survived by his wife and two children was a resident of Kashmir’s Tral, the same area where Hizb-ul-Mujahedin’s Internet-savvy commander Burhan Wani had come from and whose killing by troops on July 8, 2016 had sparked off widespread unrest in the Valley.

Another Army jawan was injured later on Monday when the Pakistani troops resorted to firing and shelling in Uri area of the Valley. The firing was still underway when reports last came in and the Army said that its men were responding to ceasefire violation “strongly and effectively”.

The firing in Uri came hours after Lt. Gen. Bhatt, “made it implicit that Indian Army reserved the right to retaliate appropriately to any incident of violation of ceasefire but is sincere in its effort of maintaining peace and tranquillity along the Line of Control provided there was reciprocity."

Lt. Gen. Bhatt, during his hotline contact with Pakistani counterpart, also emphasized that all ceasefire violations had been initiated by Pakistan. He said that the trend of infiltration along the LoC continued “with the active support of Pakistan forward posts”.

The Army officials in Poonch and Rajouri said that the latest firing and shelling by Pakistani troops has been reported from Poonch’s Balakote and Rajouri's Manjakote and Bhimber Gali sectors.

“It is mainly Manjakote where 4,000-5,000 civilian population has been affected. Intense firing is going on since 8 am. Infrequently mortar shells have landed in villages. Four to five affected families were evacuated,” DC Rajouri Choudhary told this newspaper over the phone.

He added that though ‘mass evacuation’ is not needed at this stage, the border dwellers have been asked to take precautionary measures.

“Also sixteen schools were closed as a precautionary measure. The affected villages are Panjgrain, Rajdhani and Naika. Two civilians were injured in the shelling and one of them Shah Begum who received critical splinter wounds was admitted in district hospital while the other injured Sharief Ahmed was given first aid”, the DC said.

Choudhary said that 120 students were stuck in a government-run school at Panjgrain and that after receiving an SOS from the headmaster senior officers “coordinated for their safe evacuation as shelling was reported of have affected nearby area”.

He said that the order for closure of schools was issued by him soon after reports of heavy shelling in Manjakote.

“We’ve sounded alert and advised the residents to stay indoors. Also, field officers have been deputed for coordination and various locations notified as camps for likely evacuation. Further ambulances were rushed to Ghambir, Panjgrain, Manjakote and Brahmna”, he said.

On July 15, an Indian Army Naik Mohammad Naseer was killed in firing and mortar shelling by the Pakistani troops in Rajouri sector. The same day, exchange of fire was reported also in Balakote, Panigrian, Manjakote and Naika areas in Rajouri and Poonch sectors.

A day earlier, two Army men were killed in a similar incident on the LoC in Kupwara district. Lance Naik LN Ranjit Singh and Rifleman Satish Bhagat were killed in the Pakistani firing in Furkiya area of Chowkibal.

They belonged to the Army’s Jammu and Kashmir Rifles and were residents of Jammu region of the State.

Earlier during the week, a jawan of the Territorial Army Muhammad Showkat and his wife Safia Bi were killed and their three daughters Zaida Kouser (6), Robina Kouser (12) and Nazia Bi and another person were injured when a mortar fired by the Pakistani troops exploded near their home in Karmara village of the Poonch sector.

The same day, the Pakistani authorities reported death of five civilians and injuries to a score others in the Indian firing and shelling in Chirikot, Satwal and other sectors on their side of the de facto border.

India’s deputy high commissioner JP Singh was summoned by Pakistan’s Director-General (South Asia and SAARC) Muhammad Faisal to the Foreign Office in Islamabad for the second consecutive day on July 9 over the alleged ceasefire violations by the Indian troops along the LoC.

On July 12, two soldiers were killed after Pakistan violated ceasefire in Kupwara sector of Kashmir.

Indian officials said that as many as two dozen violations of the November 2003 ceasefire agreement have taken place, so far, in June alone.

The 745-km LoC has witnessed multiple incidents of ceasefire violation in recent weeks. After each clash between the Indian and Pakistani troops, the two sides blamed each other for initiating the firing. Several civilians and soldiers on the two sides have lost their lives in the exchanges of fire and thousands of families have abandoned their homes and relocated to safer locations on both side of the de facto border.

A report from Islamabad said that four Pakistani soldiers were drowned in Neelam after their vehicle was fired upon by Indian forces on Sunday. “So far, only one body has been fished out of the river,” said an official in Muzaffarabad. Pakistan army spokesman Major General Asif Ghafoor had said earlier that the vehicle was targeted as it was moving along the Neelum  in Athmuqam town, 73-km from Muzaffarabad.

A Muzaffarabad-based reporter said that the PoK authorities have banned tourists from relocating to the picturesque Neelam valley in view of the border skirmishes. DC Neelam Choudhary Muhammad Fareed said that tourists who were already holidaying in the valley have started leaving it and “as a precautionary measure” those planning to visit the area have been asked not to come as “threat to people here is too great.”

Meanwhile, Minister of State for Defence, Subhash Bhamre, visited forward Army posts and other locations in Siachen glacier, eastern Ladakh and eastern Ladakh where he was briefed on the security situation by senior Army commanders.