A proposal will be moved for seeking cabinet approval to amend the two key laws in this regard. 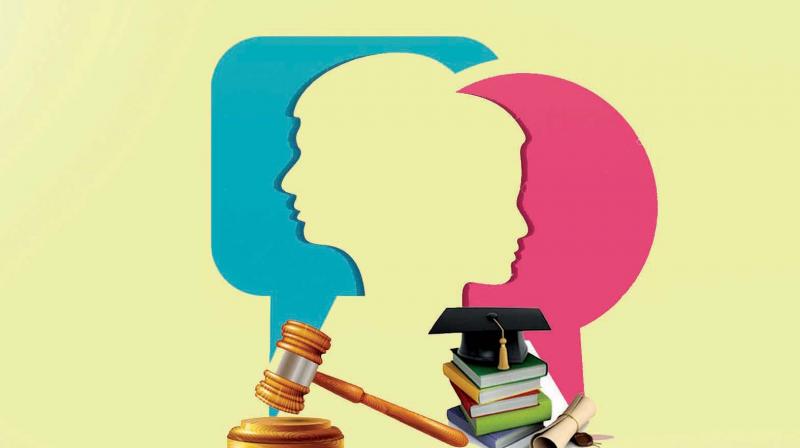 About 1.6 lakh cases of crimes against children are pending in 31 states and union territories. (Photo: Representational)

New Delhi: The Centre will soon set up fast track courts to clear the pending 1.6 lakh cases of crime against children and further strengthen the POCSO act with stringent penal provisions, Minister of State for Home Affairs G Kishan Reddy said in the Rajya Sabha on Wednesday.

A proposal will be moved for seeking cabinet approval to amend the two key laws in this regard, he said while responding to supplementaries during the Question Hour.

"The centre is going to set up fast track courts and a proposal in this regard will be placed before the cabinet in the coming days," Reddy said.

About 1.6 lakh cases of crimes against children are pending in 31 states and union territories. "We are going to clear these pending cases within two years. We are going to bring a change in the law," he added.

Besides, the Minister said the government will amend the Protection of children from sexual offences (POCSO) Act to further strengthen it with penal provisions.

"We are going to address many issues. The modification of the law will address the need for stringent measures against rising trend of child sexual abuse in the country and combat new kind of crimes," he said.

Reddy further said the government has determined that strong penal provisions will act as a deterrent. It intends to protect the interest of vulnerable children.

To a member's observation on the NCRB report stating rise in crime rate, the Minister said earlier the cases were not reported and the reporting of crime has increased with the launch of online portal after the Nirbhaya incident.

The number of cases registered have also gone up after it was made compulsory for police to register such crimes and investigate the matter within four months, he added.

About 12,609 rape cases were registered under the POSCO this year. Of this, chargesheet been done in 6,222 cases and 2,397 cases which were registered less than two months ago are under investigation There are about 3,590 cases registered more than three months ago, he said.

"This is a state subject and we are regularly writing to them to expedite the process," he said adding that the government accords utmost priority to the safety of children.

Expressing concern over cyber crime threats on children, the Minister said: "This is a serious issue. This is going to be a big challenge for the nation and in the world in future. Our government is taking steps like launch of cyber crime portal."

"The cyber crime will pose a problem in the future. There should be discussion in the House on this issue. We should bring this in syllabus and curriculum," he added.

To a query on steps taken to curb woman trafficking, the Minister said the government has launched a cyber crime portal for registration of complaints. Besides, the government is going to ask the National Investigative Agency (NIA) to look into the matter.

"Woman trafficking is a state subject but it is an international issue. So, we are going to bring NIA bill in the House. NIA will also be given the responsibility...," he said.

In his written reply, the Minister said that Ministry of Home Affairs and Ministry of Women and Child Development have issued various advisories from time to time on steps to be taken for effective prevention, detection, registration, investigation and prosecution of all crimes against children.