I have no idea about Hafiz Saeed's arrest: G Kishan Reddy

Hafiz Saeed was arrested on terror financing charges while he was on way to Gujranwala from Lahore. 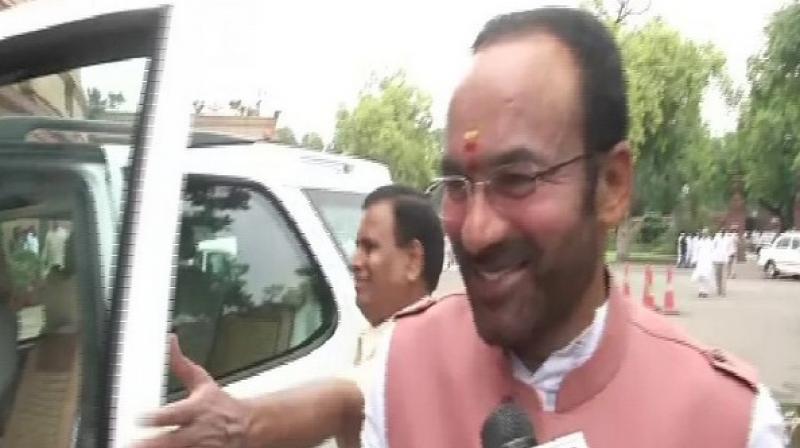 As soon as Reddy arrived in the parliament complex Wednesday, he smiled at the reporters and said: 'I have no idea about Hafiz Saeed's arrest.' (Photo: ANI)

New Delhi: Minister of State (MoS) for Home Affairs G Kishan Reddy on Wednesday said, he was not aware of the arrest of Jamaat-ud-Dawa (JuD) chief Hafiz Saeed.

As soon as Reddy arrived in the parliament complex Wednesday, he smiled at the reporters and said: "I have no idea about Hafiz Saeed's arrest."

The 2008 Mumbai attacks mastermind and UN-proscribed Jamaat ud-Dawa (JuD) chief Hafiz Saeed was arrested on terror financing charges while he was on way to Gujranwala from Lahore, officials of Punjab Counter-Terrorism Department (CTD) said on Wednesday.

"Pakistan is fooling the world that they have arrested him. We have to see how they produce evidence in courts and how efforts are made to convict him. Otherwise, it is a drama," Nikam, the special public prosecutor in the 26/11 Mumbai terror attack case, told ANI.

Saeed's arrest came two days after a Pakistan anti-terrorism court in Lahore had granted pre-arrest bail to him in a case of illegal use of land for a seminary. The court had granted interim bail to Saeed and three other accused until August 31 against surety bonds of Pak Rs 50,000 each.

On July 3, top 13 leaders of the banned JuD, including Saeed and Naib Emir Abdul Rehman Makki, were booked in nearly two dozen cases for terror financing and money laundering under the Anti-Terrorism Act, 1997.

The CTD, which registered the cases in five cities of Punjab, had stated that JuD was involved in terror funding collected through charitable organisations including Al-Anfaal Trust, Dawatul Irshad Trust, and Muaz Bin Jabal Trust.

In February, the Paris-based Financial Action Task Force (FATF) had warned Pakistan to deliver on its commitment to curb terror financing and money laundering.

Pakistan may be blacklisted by the watchdog as it is already on the "grey list" of countries who have been inadequate in curbing money laundering and terror financing.

In the wake of previous warnings by the FATF, Pakistan had re-instated a ban on two terror outfits linked to Saeed, namely, JuD and the Falah-e-Insaniat Foundation in February.

The move had come amid global pressure against Pakistan to clamp down on terror groups following the Jaish-e-Mohammed (JeM) initiated terror attack in Jammu and Kashmir's Pulwama district that killed 40 paramilitary forces in February this year.

India has time and again called for creating trust and environment free of violence and terrorism for fostering peace and prosperity in the region.