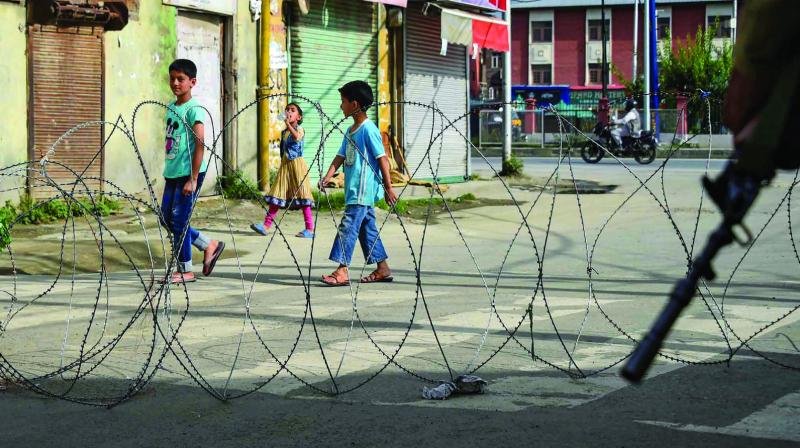 Children walk past concertina wire during restrictions following the abrogation of the provisions of Article 370 in Srinagar on Friday. (Photo: PTI)

Srinagar: At 3 a.m. on Friday, Ms Fathima, resident of Baramulla, arrived unconscious at the department of Psychiatry at the SHMS hospital. Her family members rushed her to the hospital in a car after crossing multiple security check points as she was in urgent need of medical help. After initial doses of injections and medication, the 48-year-old told the doctors she is in trauma, unable to sleep as she is scared for the safety of her family, having palpitations, and shivering continuously for the past one week.

Just like Fathima, Nazir Ahmed of Kupwara was brought unconscious to the hospital. He had a panic attack and fell unconscious soon after. But it is not just Fathima or Nazir Ahmed who are experiencing traumatic conditions.

The decision of the Centre to scrap Article 370 and impose a lockdown has led to a highly tense situation engulfing the entire Kashmir valley, leading to several locals suffering from trauma, paranoia, panic attacks or anxiety, and even depression. Mental suffering has increased at an alarming rate last 12 days, doctors reveal.

Records accessed by Deccan Chronicle from the department of psychiatry at the SHMS show that there have been close to 550 such cases since August 5, which includes men and women across all age groups, and even children. About 85 per cent of all such cases were brought in an unconscious condition.

“In conflict zones, people do experience anxiety and high levels of stress besides and other psychiatric issues. For most of them, these experiences turn traumatic as they don’t know what could happen the next moment,” Dr Arshad Hussain, head, department of psychiatry, said without elaborating further, saying he was not authorised to speak to the media.

However, a young doctor in Dr Hussain’s team said that anxiety among Kashmiris started days before the August 5 announcement as all of them had an inkling that something drastic was about to happen as the Amarnath Yatra was stopped abruptly, tourists were asked to leave, and students from outside studying here were also asked to pack up and leave.

“I am very scared and have not been able to sleep for the last 10 days. There is so much panic and tension in every household due to the lock down that all sorts of weird thoughts are crossing the mind. We are praying to almighty to end our suffering,” said Hamid Mir of Shopian, who was there to admit his wife.

“All patients were admitted to the ward for about six to eight hours and then discharged after being given prescriptions for medications. They were administered anxiolytics at the hospital, and advised rest. We offer counselling. For Kashmiris, often in the midst of violence and turmoil, abnormal is the new normal,” a lady doctor said.

Doctors say that a majority of patients come mostly during nights or in early hours as it is the time they get panic attacks. “Among the hundreds of cases which we have seen since since August 5, there are a few of them who had already been undergoing treatment for anxiety and stress but due to the lockdown and restrictions, their condition further worsened. So far, about 95 per cent of them attributed their condition to the current situation, revealed a staffer.

“People are coming from far off places like Shopian, Kupwara, Baramulla, qazigund besides downtown areas. Every Kashmiri is used to turmoil. But this time, looks like it is different and alarming,” says MD Rayees, from registration wing of the hospital.

As for children, Dr Hussain said that since there is a break in the daily routine, they are getting affected. “Schools are shut. Children cannot go and play outside or watch TV at home nor talk to anyone over phone.

Adults can somehow cope up but with children, this kind of environment badly affects their growth and overall development. It has a huge impact on their psyche which could turn them into persons with a negative mindset,” he said adding that stressful situations like this have a long term impact on the psyche of all people, irrespective of their age.