Locals say over last few days, forces personnel have cleared roads full of stones, which had been hurled from across streets and even rooftops. 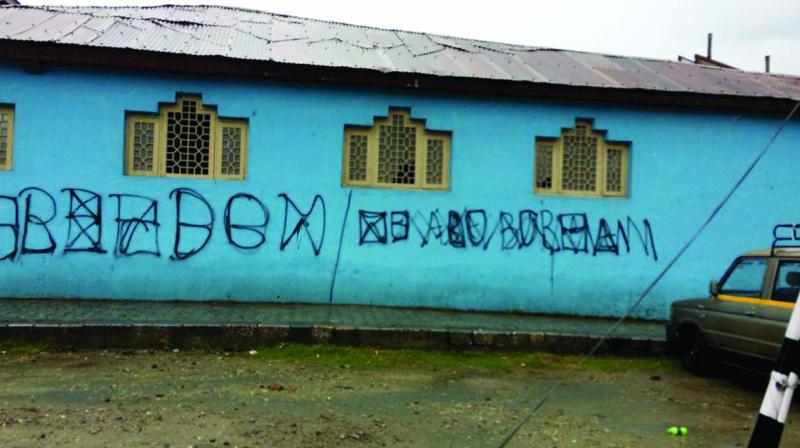 A graffiti on a wall reads ‘Freedom....We are Burhan’ in downtown Srinagar.

Srinagar: “Freedom....We are Burhan” reads a graffiti on the wall of one of the houses as one drives into the trouble hotspot Safa Kadal in downtown Srinagar. Except that the security forces appear to have put in lot of efforts to somehow ‘cover up’ the four words by spraying over it to make it look Greek script. But the writing on the wall is still clear.

As armoured vehicles keep crisscrossing several localities of the downtown while heavily armed personnel of para-military forces keep a strict vigil, in Safa Kadal -- which has always been the hub of stone pelting, besides Nowhatta, where even locals fear to go — though no pitch battles were fought, sporadic incidents of stone pelting over past 10 days has kept the security personnel on tenterhooks round the clock.

In Safa Kadal, graffiti is a new way of protesting; and the forces have to blacken the words out. ‘Go India, Go back’ and ‘Freedom’ are common slogans. Locals say graffiti has gained momentum as a form of protest after the killing of terrorist Burhan Wani.

“Fresh graffiti was sprayed fresh after August 5 when the Centre betrayed us by scrapping Article 370 and divided the State into two Union Territories. Security forces were seen spraying over the anti-India slogans and trying to erase, distort or disfigure the slogans. Anti-India graffiti will come up again once restrictions are eased,” taunted a local who identified himself as Saqib Mir.

Locals say over last few days, forces personnel have cleared roads full of stones, which had been hurled from across streets and even rooftops.

“Stone-pelters have kept us engaged regularly but we are patient. It is not happening on the scale on which it used to happen on Fridays before,” disclosed a CRPF personnel posted.

As pelters write ‘Go India, Go Back’, forces change it to ‘Good India, Good’ and disfigure the word back.

“It is a cat and mouse game,” said Rashid Ahmed, a fruit vendor.