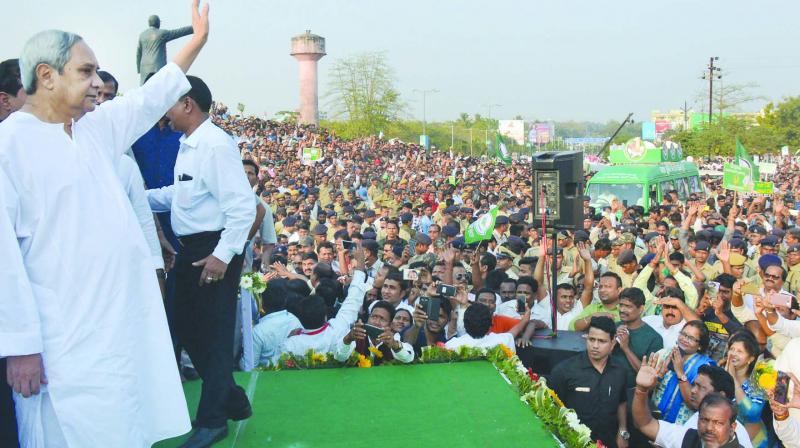 BJD president Naveen Patnaik has been working hard to spread his regional party’s reach ahead of the 2019 elections.

Bhubaneswar: The Biju Janata Dal (BJD) led by Odisha chief minister Naveen Patnaik seems to have proved an ideal platform for senior politicians of the state to accommodate their sons, daughters and wives in party politics. While the BJP and Congress fail to attract the family and friends of the senior politicians as the two parties struggle to do well in the electoral exercises.

Nearly a dozen veteran politicians have rehabilitated their near and dear ones in the regional BJD.

It all started in 2000 when Naveen Patnaik, then Union minister resigned from the Atal Behari Vajpayee government to lead the state as chief minister. He nominated party’s senior leader Ramakrushna Patnaik’s wife Kumuduni Patnaik to contest from the Aska Lok Sabha constituency vacated by him. In the same year also, Naveen Patnaik gave ticket to Bijaya Laxmi Patnaik, widow of former MLA and Biju Patnaik’s son Aruna Kumar Patnaik to contest from Khandapara.

In 2014, Naveen Patnaik brought Bijaya Laxmi’s son Anubhab Patnaik to the party fold and got him elected from Khandapara Assembly seat.

In 2002, the BJD chief nominated Mandakini Behera, wife of his cabinet colleague Bhagabat Behera, to contest the Nayagarh Assembly by-election after the latter’s untimely death. Ms Behera won the seat by defeating Sitkanta Mishra of the Congress.

The chief minister also accommodated Rajanikant Singh, son of party leader Adwaita Prasad Singh, in the party and got him elected to the Assembly from Angul.

After rehabilitating his son on the Dharmasala seat, Mr Das went to the Rajya Sabha.

In 2014, after the death of Hemendra Chandra Singh, the BJD MP from Nayagarh, Naveen Patnaik gave ticket to the latter’s wife Pratyusha Rajeshwari Singh and ensured her victory by a massive campaign.

Apart from turning out to be the launching pad, the regional party has also become the most fertile platform for the friends and relatives of the senior leaders to grow in their career. Kalindi Behera’s son is now an important minister in the Naveen Patnaik’s council of ministers.

Senior BJD leader and former Odisha steel and mines minister Padmanabh Behera’s wife Bishnupriya Behera had also blessings of Naveen Patnaik. She got party ticket in 2000 and became the child welfare minister of the state.

Besides rehabilitating party leaders’ family members, Naveen Patnaik in the last 20 years, has successfully wooed sons and daughters of leaders who were once opposed to his party.

Communist leader Nityananda Pradhan and his daughter Renubala Pradhan were enrolled into the BJD and sent to the Lok Sabha and the Rajya Sabha.

Former chief minister and Congress leader Nandiini Satpathy’s son Tathagat Satpathy has remained with the party since its birth in 1997. Pranab Prakash Das, son of Ashok Das, went on to become one of its most powerful leaders.

Very recently, Naveen Patnaik attracted to his party his bitter critic Soumyaranjan Patnaik, son-in-law of former chief minister J.B. Patnaik of the Congress.Sources in the BJD said that a few more leaders of the party are planning to field their sons in the 2019 electoral battle.

The Congress and BJP, in contrast, have rehabilitated only a small number of people from political background.

After the death of former Bhadrak MLA Biren Palei, the Congress successfully wooed his younger brother Naren Palei to contest from the seat.

Former chief minister and senior Congress leader Giridhar Gamang, who is now in BJP, had also successfully promoted his wife Hema Gamango by getting her elected from the Koraput Lok Sabha seat.