Goa Congress submitted a letter before the Raj Bhavan but there has not been a meeting between the Governor and them. 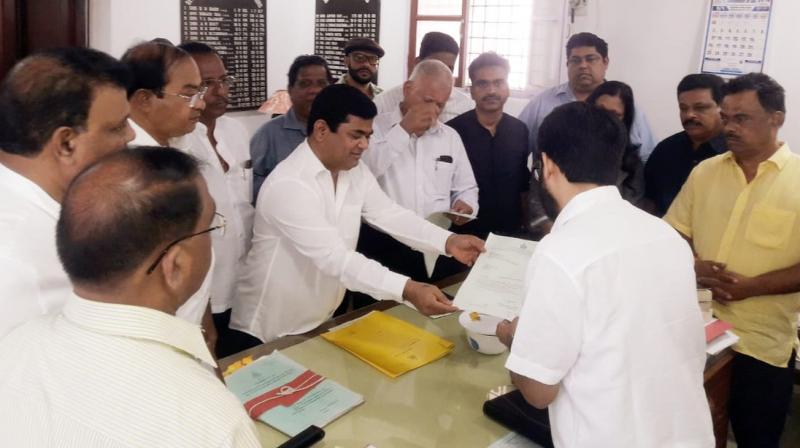 Goa Congress, along with its 14 MLAs, staked claim to form govt in the state. They submitted a letter before the Raj Bhavan but there has not been a meeting between the Governor and them. (Photo: ANI | Twitter)

The Congress, which has 16 members in the 40-member state Assembly, submitted a memorandum to Governor Mridula Sinha, urging her not to dissolve the Assembly and instead invite the party to form the government, Leader of Opposition Chandrakant Kavlekar said.

Sinha is, however, out of the state and will be back on Tuesday.

The move came at a time when the BJP highcommand has sent three senior leaders -- Ram Lal, B L Santhosh and Vinay Puranik -- to meet the state party leaders and allies to take stock of the political situation.

It seems the BJP central team failed to make any headway into an alternative for the ailing Parrikar. They met former Goa party lawmakers in the morning but no clear picture emerged on a new leadership.

BJP leader Ram Lal said the BJP government in Goa was stable and that no demand had been made for a change in leadership. He said the BJP's alliance partners -- the Goa Forward Party (GFP), the Maharashtrawadi Gomantak Party (MGP) and Independents -- conveyed that they will agree to any political decision taken by the saffron party

Congress Legislature Party chief Chandrakant Kavlekar said as the single largest party, the Congress should have been given the first chance to stake claim. “See how the government functions today. Government hotey huey bhi na ke barabar jai. We have the numbers, so we are staking claim. The Governor will be here tomorrow. We shall request him,” Kavlekar said.

All the 16 Congress MLAs, led by Kavlekar, went to the Raj Bhavan on Monday morning.

“The party urged the governor not to consider dissolution of the state Legislative Assembly, which is a possibility considering internal fighting in the ruling alliance and the illness of Parrikar,” Kavlekar told PTI.

He said the Congress has support of legislators from other parties and can form the government, if given a chance by governor.

"We will prove our majority on the floor of the House," he said.

The BJP has 14 seats in the Assembly, its allies Goa Forward Party and MGP have three each. Three Independents and an MLA from the Nationalist Congress Party also support the BJP. Congress, which emerged as the single largest party with 16 MLAs, was outmaneuvered by the BJP in government formation last March.

Parrikar, 62, who is suffering from a pancreatic ailment, is currently admitted in the All India Institute of Medical Sciences (AIIMS) in New Delhi for treatment.