The Supreme Court on Monday extended house arrest of 5 rights activists, suspected of having Maoist links, till Sep 19. 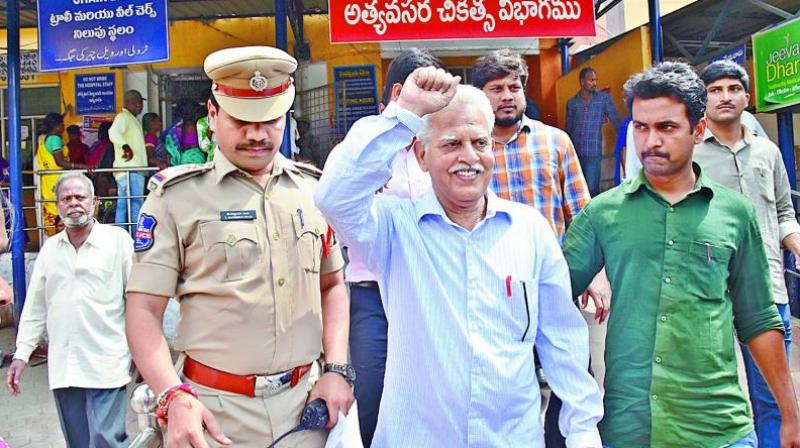 Five activists were arrested in multiple raids across country in connection with the Bhima-Koregaon case in August. (Photo: File)

New Delhi: The Supreme Court on Monday extended the house arrest of five rights activists, suspected of having Maoist links, till September 19.

While setting September 19 as the final day of hearing of the petition challenging the arrest of rights activists, the apex court said, “Every criminal investigation is based on allegations. We have to see whether there is some material”.

Earlier, the Centre questioned the way petitioners had directly approached the Supreme Court seeking the release of five rights activists.

Senior lawyer Maninder Singh appearing for Central government said, "They (petitioners) have options to approach the lower court, high courts or even other legal options to seek redressal."

“The menace of Maoists and Naxalites is increasing day by day, and it is these accused persons who are responsible for the increasing threat of the anti-social activities,” Singh further told the apex court.

Chief Justice of India Dipak Mishra observed: “We entertained the case on the foundations of liberty. Issues like independent inquiry etc, comes at a later stage.”

A petition by historian Romila Thapar and four others has challenged the arrest of the five activists that sparked series of protests from human rights activists. The petition sought the release of all activists who have been arrested during raids in connection with the Bhima-Koregaon case.

The Maharashtra government also told the top court that the accused have been arrested for their involvement in the Bhima-Koregaon case.

Tushar Mehta, senior lawyer appearing for Maharashtra government, said, “The accused have not only been arrested for their alleged involvement in the case but they also seem to be disrupting peace in the country.”

The Maharashtra government further opposed the petition filed and claimed that the petitioners are neither related to the case nor they have any idea about it.

“Those who had filed the petition are neither related to the case nor do they have any idea about it. Also, there are many alleged incriminating documents recovered from accused,” Mehta added.

Representing several petitioners, lawyer Abhishek Manu Singhvi said the reason behind directly approaching the apex court was to appeal for a court-monitored probe or an investigation by the CBI or the NIA to determine gravity of the case and also to find out who were involved in the Bhima Koregaon violence.

He also said no accused person was present in the programme of Yalgar Parishad that day. They were not named in the FIR either.

The raids were carried out as part of an investigation into an event called Elgar Parishad, or conclave, on December 31 last year, which had later triggered violence at Bhima-Koregaon village in Maharashtra.