Haryana CM warns of action against anyone harbouring rape accused

Haryana CM has directed the police to take stringent action against one of the key accused who was arrested on Sunday. 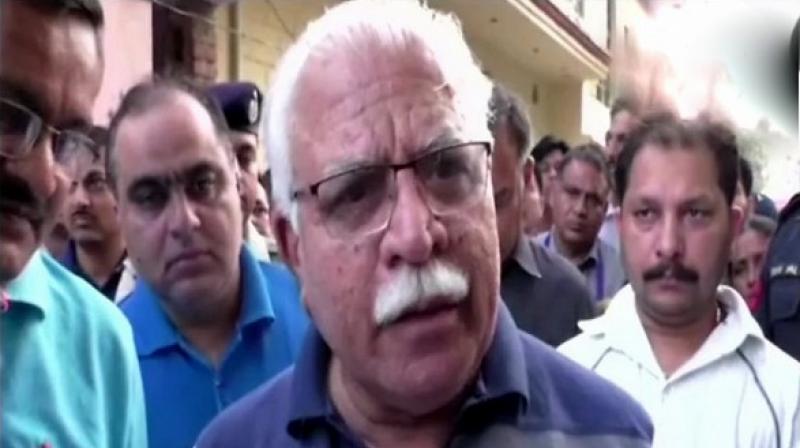 Karnal (Haryana): Haryana Chief Minister Manohar Lal Khattar has directed the police to take stringent action against one of the accused who was arrested on Sunday in the alleged gang-rape incident in Rewari.

Speaking to the media in Jammu, Rajnath Singh said, "I have spoken to Haryana Chief Minister who has assured me of taking appropriate action in the case."

The FIR registered at Kanina identifies three accused - Pankaj, Manish and Nishu. While Nishu has been arrested, Pankaj, who is a Defence personnel stationed in Rajasthan, and Manish are yet to be arrested.

Addressing the media in Karnal, Khattar assured that the remaining two accused in the case would also be arrested soon. He warned that strict action would be taken if anyone was found harbouring them.

"Police have been directed to take strict action in the case. The other two accused in the case will also be arrested soon. I appeal to the public not to harbour them. Strict legal action will be taken against those who harbour them," the chief minister said.

On Sunday, the Special Investigation Team (SIT) in-charge of the case and Nuh Superintendent of Police (SP), Naazneen Bhasin, confirmed that one of the three main accused in the case, along with two aides, was arrested.

SP Bhasin informed that Nishu, one of the three main accused who was found to have allegedly planned the crime, was arrested along with two aides including Deen Dayal, the owner of the tubewell where the incident took place and a doctor, Sanjeev, who allegedly gave first aid to the victim.

Meanwhile, the Medical Superintendent of the Rewari district hospital, Sudarshan Panwar confirmed that the victim's condition is normal and that she is recovering well from the trauma.

Newly appointed Rewari Superintendent of Police (SP) Rahul Sharma, who was appointed as a replacement for former Rewari SP Rajesh Duggal on Sunday, met with the victim earlier on Monday. He said that her safety and the nabbing of the remaining accused were the two primary objectives right now.

"Safety of victim is one of the main concerns, arresting the remaining accused is another. It doesn't end with the arrest but with conviction of the accused. So securing evidence and ensuring they get convicted through fast track court would be the next step," Sharma said.

Also, Rewari Deputy Commissioner Ashok Kumar Sharma said that the family of the victim had requested that no one, without permission, should be allowed to visit them at the hospital. A cabin outside the hospital was being constructed in line with the request where people can meet the family.

"If they (victim's family) want to meet them inside the hospital, they will (be allowed in), otherwise they won't. The family has also said that they are satisfied with the treatment and have given that in writing, so the treatment will continue here," Sharma said.