Children stumbling under the weight of their schoolbags is a common sight in Bengaluru. 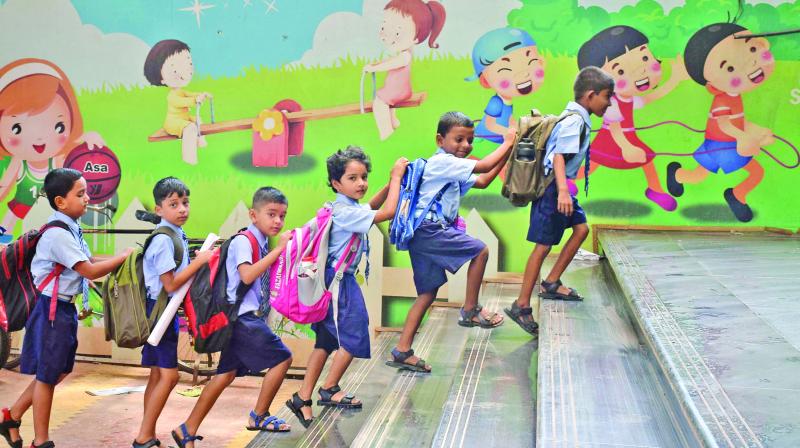 The debate over heavy bags and unnecessary amounts of after-school work has raged on for years but simply hasn't found the right support.

The issue has been hanging fire for years, but while the authorities debate and delay, little children in the city’s schools continue to carry the burden of homework and heavy schoolbags.  It was in 2016 that the Union Ministry of Human Resources Development directed the CBSE  to issue circulars to schools telling them to advise students of classes 1 and 2 not to carry school bags and to stop giving them homework.

The CBSE did issue the circular on September 12, 2016, but seeing little change on the ground, it was pulled up by the Madras High Court on August 11 this year, and advised  to enforce its diktat more seriously. A few days later,  on August 20, the court ordered the CBSE to publicise in the media that strict action would be taken against schools not following the ‘No Homework’ rule

And complying, the CBSE’s recent circular has advised its affiliated schools to reduce the weight of school bags in the interests of the children’s health and not to prescribe home work, which could add to their burden both literally and figuratively speaking. “Young children whose spine is at a crucial stage of growth are most susceptible to hazards such as back pain, muscle pain, shoulder pain, fatigue and in extreme cases the distortion of spinal chord or shoulders that may most plausibly be attributed to heavy school bags,” read the circular.

The Karnataka government, which too has been slack in reducing the burden of little children , seems to have finally woken up as well and held a meeting on September 3 this year with private school managements to discuss the twin issues of doing away with heavy school bags at least two days a week and homework all days of the week for students of  UKG and classes 1 and 2.

The meeting clearly did not go down well as earlier this week, on September 11, the private school managements condemned the ‘unscientific’ draft guidelines prescribed by the Department of State Educational Research and Training (DSERT) for enforcement in the state

Mr D. Shashikumar, general secretary of the Karnataka Associated Managements of Primary and Secondary Schools (KAMS) is categorical in his opposition to these new norms, insisting that such decisions should be backed by proper research. “The government should work scientifically and give orders that are acceptable to all stakeholders,” he says, revealing that   private school managements in the state are okay with only one “No Bag Day” a week.

President of the Managements of Independent CBSE Schools Association (MICSA), M. Srinivasan too is unhappy with the guidelines issued by his board, and insists that  giving students homework is necessary as it encourages them to think constructively  and contributes to “better brain development and retention capabilities.”

“Homework encourages students to revise portions taught in school after class hours,” he says. Strongly critical of both  the CBSE and the DSERT for coming up with  directives without scientific backing, he says that such decisions should be taken with care. “A comprehensive survey should be done among students, teachers and parents before making these guidelines the norm,” he stresses.

Parents are equally opposed tot he No Homework policy, say principals and teachers. “Parents love to compare their children’s academic progress with that of children from other schools. They like to look into their  work books to assess their progress and help them revise what they have learnt in school during the day,” says a principal of an ICSE school in the city. Arguing that the  workload of students till second grade is very small and puts no pressure on them, he says homework helps build their interest in information outside their textbooks.

While one parent, Mr Ravi Nair, an advertising professional whose sons study in grade one and four in a city school, is happy with the government’s move on reducing heavy school bags, he believes homework should be done online in future.  Welcoming the proposal to have “No Bag Days,” he says, “I have always felt that schools burden children with heavy books, which they don’t always need. Instead, students should be trained to go online for any pending work on reaching home to make learning fun. While smartphone applications are easy and feasible to create, even budget schools can develop a platform to make learning and revision an interactive process from home,” he suggests.

Education expert, Preethi Vickram, however, feels that it is high time the concept of homework underwent a comprehensive transformation. “Rather than being mere revision, homework should enhance the communication and application skills of children at home. They should be encouraged to interact with parents to know how a particular concept  taught at school is used in practice. In short, homework should play a complementary role, rather than being a repetitive process,” she says.

Responding to the criticism of school managements, principals and parents on the issue,  Prof. Niranjanaradhya V.P, head of the universalisation of equitable quality education programme at the Centre for Child and the Law, National Law School of India University (NLSIU) , who was on the committee which  drafted the guidelines on homework and schoolbags, says it is unfounded.

“Such policy  decisions are taken by the government only on the basis of  systematic studies.  Doctors were consulted to prescribe the optimal weight of school bags for children of various ages,” he reveals adding that schools should not blame parents for encouraging them to do  homework and instead convince them that their children can do well in their studies even without doing it at this stage of their learning.

2016 – MHRD directs CBSE to issue circular to schools to ask students of Class 1 and 2 not to bring school bags, also asking teachers not to prescribe homework for the same

2018 (Aug. 11) – Madras HC pulls up CBSE, directs CBSE to send circulars to all affiliated schools to strictly implement ‘No Homework’ rule and to prescribe only NCERT books

2018 (Aug. 20) – Madras HC orders CBSE to publicise in media that strict action will be taken against schools not following ‘No Homework’ rule

2018 (Sept. 3) – DSERT holds meetings with school managements where draft guildelines were read out

2018 (Sept. 11) – Private school managements from Karnataka condemn ‘unscientific’ guidelines mentioned in DSERT-formulated draft guidelines to be implemented in the state