Amit Shah has sent three senior members of BJP to Goa to take stock of political situation there in view of Parrikar's indisposition. 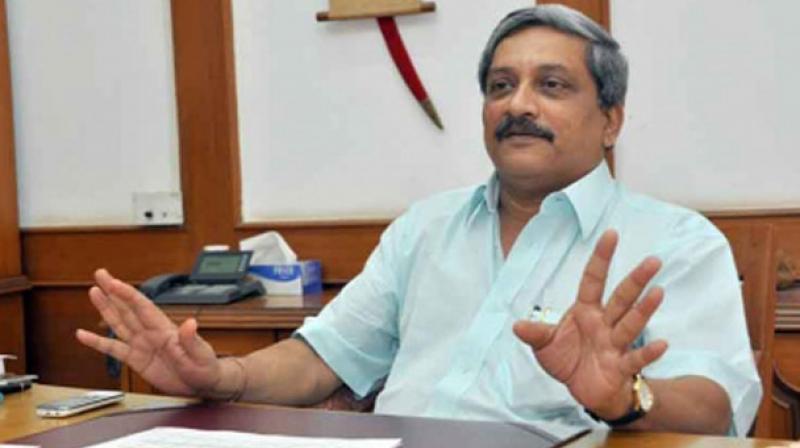 The three-member team, which is on a two-day visit to Goa, also met the BJP's allies in the state. (Photo: File)

Panaji: The BJP on Sunday ruled out a change in leadership in Goa, claiming Chief Minister Manohar Parrikar who has been admitted to New Delhi's All India Institute of Medical Sciences (AIIMS), is fine.

BJP president Amit Shah has sent three senior members of the party -- B L Santhosh, Ram Lal and Vinay Puranik -- to Goa to take stock of the political situation in the coastal state in view of Manohar Parrikar's indisposition.

"Whatever was discussed today will be briefed to you tomorrow. There is no issue about the government and there is no demand of change in leadership from anyone," Ram Lal told reporters after a series of meetings with state BJP leaders and MLAs in Panaji.

The three-member team, which is on a two-day visit to Goa, also met the BJP's allies in the state.

He declined to divulge details about the meetings, but Goa BJP president Vinay Tendulkar said there is no question of leadership change in the state as Parrikar is "fine".

"During the meetings with central observers today we discussed organisational issues. There is no issue of leadership," Ram Lal said.

Manohar Parrikar has been admitted to AIIMS for follow-up treatment, reportedly for a pancreatic ailment.

The 62-year-old IIT engineer-turned-politician is running the BJP-led government with the help of two regional allies -- the Goa Forward Party (GFP) and the Maharashtrawadi Gomantak Party (MGP) -- and three Independents.

When pointed out that the GFP has asked for a "permanent solution" for the situation arising out of Parrikar's indisposition, Tendulkar said there is no need to change the leader.

"The chief minister is in good health and there is no need to change the leadership. The core committee (of the Goa BJP) will meet tomorrow," he said.

Earlier, alliance partners had asked the BJP's central observers to a provide permanent solution to the situation arising out of Parrikar's illness and his absence from day-to-day administrative work.

All the three MLAs of the GFP and the Independent legislators met BJP observers this evening in a city hotel.

The series of meetings began in the afternoon when BJP legislators and leaders met the emissaries. This was followed by BJP's alliance partners meeting them.

"We have put forth our points about present political situation in Goa. We have asked them to provide permanent solution," GFP president and Agriculture Minister Vijai Sardesai told reporters outside the hotel after meeting the observers.

He said the discussion centred around the current political situation in Goa and also preparations for the upcoming Lok Sabha elections.

BJP leader and Deputy Speaker Michael Lobo said the future strategy of the state government would be decided after the observers submit their report.

Michael Lobo said there is no problem in the party but the chief minister not keeping well is a problem.

"The observers are sent by the party high command and they are monitoring the situation. Let them report to the high command (and) come back to us with the solution for the problem," he said.

Health Minister Vishwajit Rane of the BJP said he has given his views about the political situation to the observers and it is now for the party to take a decision.

All the three MLAs of the MGP separately met the BJP observers but did not speak to media persons.

Meanwhile, the main opposition Congress said it is closely watching the developments.

The BJP currently has 14 legislators in the 40-member Assembly, while the GFP and the MGP have three each. The national party is also supported by three Independents.

The Congress has 16 MLAs while the Nationalist Congress Party (NCP) has one legislator.

The Congress said Sunday it may explore the possibility of forming a government but "not by compromising the state's interest".

"Our stand is very clear. We will definitely explore all possibilities but that does not mean that we will do it by compromising the ideology or the interest of Goans," All India Congress Committee secretary A Chellakumar, who is also Goa in-charge of the party, said.

"We are not in a hurry to capture power by compromising the interest of the people of Goa. The Congress is accountable to the people," he said.

"All our MLAs are together. We are watching what is going on in the ruling camp. The internal bickering has already started. The Cabinet ministers have started throwing stones at each other," he said.

The Congress leader said all legislators in Goa, cutting across party lines, should take a stand for the sake of the state.

Manohar Parrikar was admitted to the AIIMS Saturday morning. He had undergone a three-month-long treatment in the United States earlier this year.

The MGP had said Saturday it was "high time" Parrikar handed over the charge to the senior-most minister in his Cabinet during his absence.