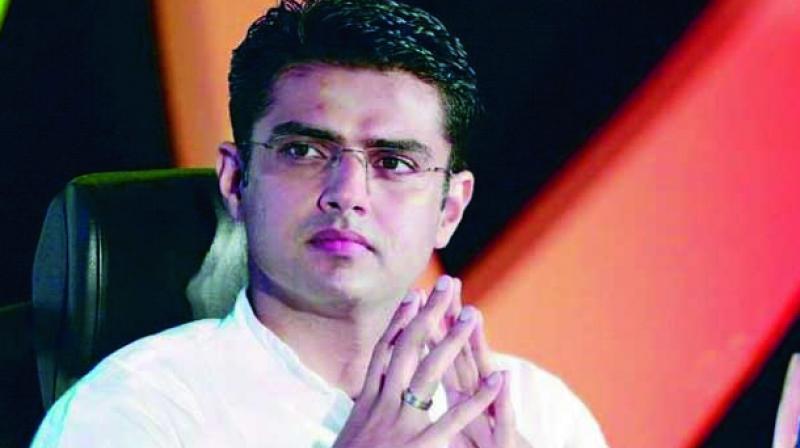 Jaipur: State Congress president Sachin Pilot has taken chief minister Vasundhara Raje’s recent criticism with a pinch of salt. She called him a novice in politics who is unfamiliar with Rajasthan’s culture but for the young Congress leader the chief minister’s compulsion to take note of him itself shows his growing significance in the poll-bound state.

Till recently, Ms Raje never directly reacted to Mr Pilot’s remarks, notwithstanding his constant attacks and success in one by-election after another.  Her guns were always trained at former chief minister Ashok Gehlot.

However, now Mr Raje has turned her focus on Mr Pilot - a recognition of the young  leader’s growing clout in state politics who, as  chief campaigner of the Congress, is  trying to dethrone the chief minister.

Mr Pilot has already shown maturity saying that he would not comment on her because she was older to him but in political arena he is capable of tackling her, which he is already doing by making it a contest between a “royal” and a “commoner” in his speeches.

Ms Raje’s response should make Mr Pilot happy because it indicates two things: one, she now recognises him as main the challenger. Second, she is bereft of any issue to attack him.

Interestingly, her attention shifted to Mr Pilot despite a recent survey in which she was tied with Mr Gehlot (35 per cent) as popular choice for the chief minister’s post while the young PCC chief (8 per cent) was way behind them.

Congress sources said that Mr Raje now genuinely sees a bigger threat in the young PCC chief than old warhorse Mr Gehlot. There are many compelling reasons for her to believe this.

Mr Pilot’s “Sankalp Rallies” being held in different parts of the state to counter her “Gaurav Yatra” have been drawing huge crowd.  The Congress seems to have found in him a perfect answer to counter charisma of Ms Raje who till now enjoyed huge fan following among young and women voters.

Apart from the age advantage, the young PCC chief’s charm offensive is further boosted by good looks and a Wharton degree. He is popular  among young voters.

Besides, he can also give Ms Raje a run for her money in oratory and theatrics, something Mr Gehlot was always found wanting in.

If Ms Raje can put on local attire and dance with local women, he can effortlessly tie turban, touch feet of elderly, sit on a cot and sip tea in a glass on a roadside dhaba.

BJP insiders said that Ms Raje’s attack on Mr Pilot could also be a strategy for winning over supporters of Mr Gehlot, who has always felt threatened by the growing stature of Mr Pilot.

Ms Raje’s move to criticise Mr Pilot may also be an attempt to woo Meena and Mali voters who are traditionally perceived to be opposed to Gurjars — a community to which Mr Pilot belongs.