To a question, Rajnath Singh said India has made all efforts to improve ties with Pak adding 'but we cannot change behaviour of Pakistan'. 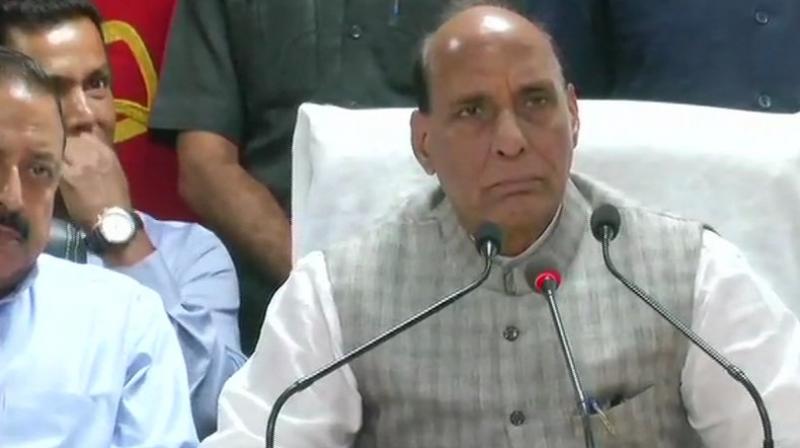 Jammu: Home Minister Rajnath Singh on Monday appealed to political parties to participate in the forthcoming panchayat and urban local body polls in Jammu and Kashmir, in the wake of the NC and the PDP announcing a boycott of the elections.

Singh's appeal came after the two major regional parties -- the National Conference and the Peoples Democratic Party -- announced that they would not take part in the elections as the Centre has not cleared its stand on Article 35A of the Constitution.

"I would like to appeal that all the political parties should participate in the political process. This will provide an opportunity to them to interact with the people," Singh said at a press conference in Jammu.

Article 35A was incorporated in the Constitution by a 1954 Presidential Order and accords special rights and privileges to the Jammu and Kashmir citizens. The Article, which denies property rights to a woman who marries a person from outside the state, has been challenged in the Supreme Court and the matter is still under consideration.

To a question, the home minister said India has made all efforts to improve its relations with Pakistan and cited the impromptu visit of Prime Minister Narendra Modi to that country to buttress his point.

"But we cannot change the behaviour of Pakistan. They will have to understand how to behave with a neighbour," he said.

Earlier, Singh inaugurated two smart fence pilot projects along the Indo-Pak border near in Jammu. "Border security is our top most priority. I am happy to inaugurate two pilot projects under CIBMS (Comprehensive Integrated Border Management System) today. We have already identified vulnerable areas and gaps on all borders," he said.

Singh said the government was working towards upgrading border infrastructure, and more than 600 km roads have been constructed in border areas and hundreds of border out posts have been built.