Cops verify his diary with details of politicians from both ruling BJP, Congress. 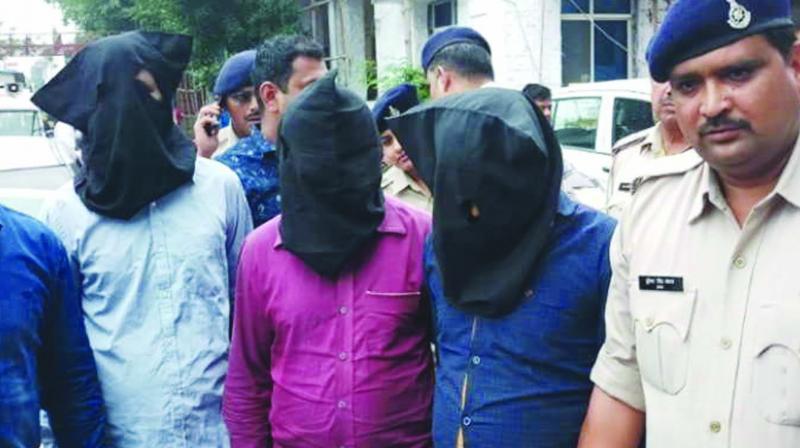 Bhopal: Facts can be more sensational than fiction at times. “Serial Killer” Aadesh Khamra’s narratives of grisly murders of his victims can be more gripping than the crime thrillers of Alfred Hitchcock. And with his claim on having links with politicians, the plot has only got thicker.

“He was a tough nut to crack. Initially, he tried to distract us from digging into his crimes with his amazing manipulative skills. He broke down when we successfully instilled in him a fear of curse on his family for his sins,” a senior police officer told this newspaper.

He described the killings of two sibling truckers in 2010 like running a cricket commentary narrating how he used his gift of the gab to befriend the two truckers and offered them drinks laced with sedatives before strangulating them with a piece of rope, the interrogator said.

“His narration was well punctuated, flowing and captivating. He could have otherwise made an excellent story teller,” he observed.

The alleged gang leader of highway robbers had then looted consignment of iron being transported by the truckers and sold them to a businessman in Uttar Pradesh, said to be his key client.

“At least for me, this is the once-in-a-lifetime case,” Bhopal district superintendent of police (south zone), Rahul Kumar Lodha, who headed the interrogation team, remarked.

“A diary recovered from him has indicated his links to some politicians belonging to both the ruling BJP and Congress,” a senior police officer said, adding that they are his political links.

Police has reportedly established his links with a BJP leader who was accused of hiring contract killers to murder his rival eight years ago.

Son of a retired Armyman, the “serial killer”, a school dropout, had first taken to tailoring for a living. Later, he tried his hand in some odd jobs at several places in Madhya Pradesh before shifting to Nagpur in Maharashtra where he landed a job in a garment factory.

He, however, returned to his village, Mandideep, on the outskirt of Bhopal in 2010.

By the time, he had entered into the crime world and got involved in the killing of at least eight truckers on NH 6 during highway heists.

Earlier, he would abandon the trucks after killing their drivers.

His luck ran out when one of his accomplices, Jaikiran Prajapati, was arrested in connection with murder of a truck driver.

Jaikiran told investigators that Aadesh was the kingpin of the inter-state highway robbery gang, leading to the latter’s arrest by a team of MP policemen in the jungles of Sultanpur in Uttar Pradesh on September 7.

So far, Aadesh has reportedly confessed to killing of 33 truckers.

Police strongly suspected that his victim count might be “much more”.

“He is very cunning. He never loses cool despite being grilled for 6-7 hours. He chooses his words carefully while responding to interrogation to save himself during his trial in the court later,” another interrogator said.

He has reportedly spread his tentacles in the states of MP, Chhattisgarh, Bihar, Jharkhand, Odisha and Maharashtra.

His relatives and friends however could not believe he could be a cold-blooded murderer.

“His demeanour used to be suave and caring. Nobody in our locality could believe he could be such a hardcore criminal,” one of his neighbours said.

“We learnt about his horrific crime record from newspapers. We are devastated,” Aadesh’s elder son Shubham, a government employee, said.

Police suspected that Aadesh was perhaps inspired by his uncle Ashok Khamra who had admitted to killing  100 truckers in 2003 when he escaped from police custody while being taken to court for hearing in one of the murder cases.

“Aadesh has displayed traits of a psychopath killer. He seems to be very scheming. Motive behind his horrific crimes seemed to be greed,” psychologist Aditi Saxena told this newspaper.

While two of his gang members have so far been arrested, police has launched a manhunt to nab other members of his team who are suspected to have gone into  hiding .