During his day-long visit, Rahul will embark on 15-km-long roadshow after taking blessings of more than 11 Hindu priests. 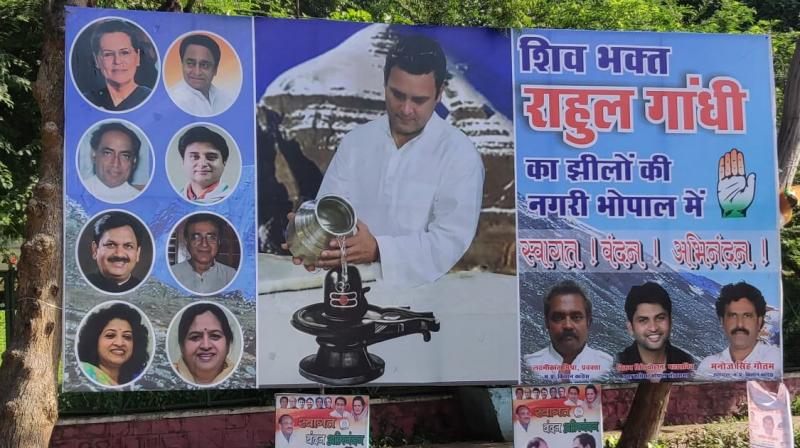 Life-size cutouts and huge posters describing Gandhi as a devotee of Lord Shiva have come up in the city. In the posters, Rahul Gandhi is seen pouring holy water on ‘Shivalinga’. (Photo: Twitter | ANI)

Bhopal: Congress president Rahul Gandhi on Monday launched his party’s poll campaign in Madhya Pradesh, known to be a BJP bastion, with a road show in Bhopal.

Gandhi was received by state Congress president Kamal Nath and senior party leader and Guna MP Jyotiraditya Scindia, among others, at the airport. Thousands of Congress workers and supporters holding the party's flags chanted "Rahul Gandhi Zindabad" as he left the airport.

Life-size cutouts and huge posters describing Gandhi as a devotee of Lord Shiva have also come up in the city. In the posters, Rahul Gandhi is seen pouring holy water on ‘Shivalinga’.

After his arrival at the airport, Rahul Gandhi sought the blessings of more than 11 Hindu priests.

The Congress chief then embarked on a 15-kilometre-long roadshow in an open vehicle from Lalghati Chowk close to the Raja Bhoj Airport in Bhopal. He will later address party workers during his day-long visit to the state capital.

Gandhi's roadshow will conclude at Bharat Heavy Electricals Ltd's Dussehra Maidan, where he will interact with party cadres. Besides, he is going to address a meeting of Congress workers, which is open to the public, before leaving in the evening, state party spokesperson Pankaj Chaturvedi said.

Ahead of the visit, Congress has put up posters and banners in Bhopal describing the 48-year-old party chief, who just returned from a pilgrimage to Kailash Mansarovar, as a 'Shiv bhakt'. 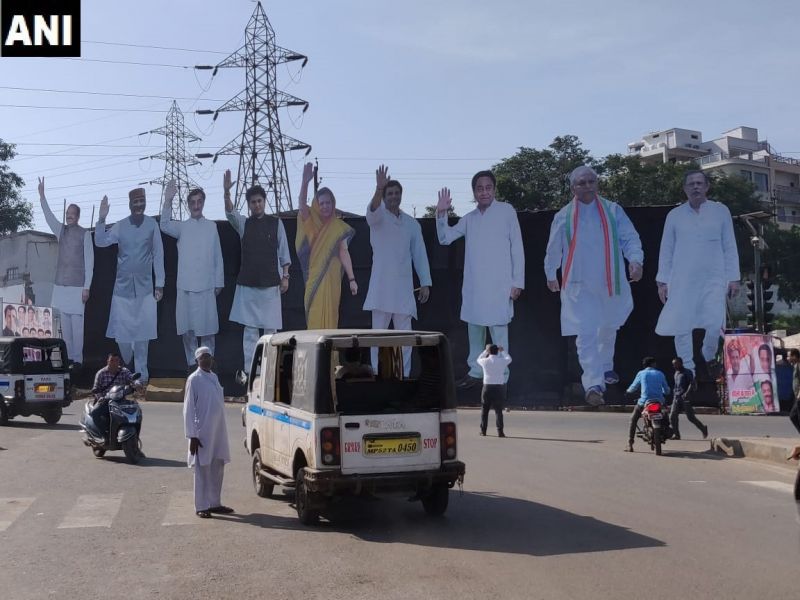 Security has been tightened in the city in view of Gandhi's visit, Bhopal Inspector General (IG) of Police Jaideep Prasad said. "We have got an extra force of 1,500 policemen who have already been deputed," he said.

"We are expecting more than one lakh Congress cadres in the state capital," a police officer said.

Meanwhile, a BJP leader said party chief Amit Shah and Prime Minister Narendra Modi will attend a function in Bhopal on September 25. Earlier, a visit by Shah to Ujjain district on September 12 was put off.

"It was a tentative programme of Shahji that has been postponed as he along with Prime Minister Narendra Modi is going to grace a function on September 25 here," state BJP spokesperson Rajnish Agrawal said.

Preparations are underway to make the September 25 event a huge success, Agrawal added.