Rahul Gandhi alighted from the bus during his Bhopal roadshow and enjoyed tea and ‘samosa’ at a stall near Sadar Manzil. 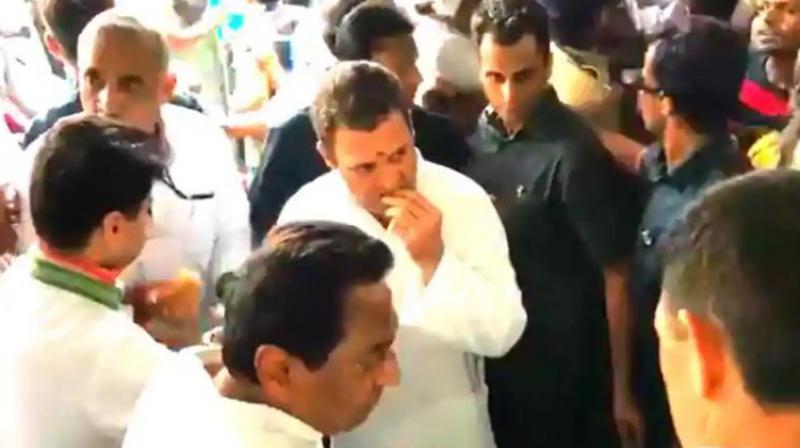 Bhopal: Congress president Rahul Gandhi took a brief halt during his roadshow in Bhopal Monday and had tea and ‘samosa’ at a roadside stall.

He also posed for a selfie with the tea stall owner and his staff, Congress MLA Jitu Patwari told PTI.

Earlier, the 48-year-old Congress chief set out on the roadshow after taking blessings from 11 Hindu priests as he kick-started his party’s campaign in poll-bound Madhya Pradesh.

Enroute his 15-km-long roadshow, Gandhi alighted from the bus and enjoyed tea and ‘samosa’ at a stall near Sadar Manzil, said Patwari, the legislator from Indore district in MP.

When Patwari told Gandhi that the tea shop owner and his staff members wanted a selfie with him, the Congress chief happily obliged.

After having the refreshments, Gandhi hopped on to the bus to continue with his roadshow.

A large number of Congressmen and local people queued along the road sides and jostled to catch a glimpse of the Gandhi scion.

Security personnel were seen having a tough time in ensuring a smooth passage for Gandhi’s vehicle amid the crowded roads.

The Congress chief, whom the main opposition party in the state has been describing a “Shiv bhakt” in banners and posters put up in Bhopal, arrived at the airport here earlier in the day to a grand welcome.

Kamal Nath and Scindia received him at the airport.

Hindu priests, chanting mantras, blessed Gandhi as he reached the Lalgathi area, amid a heavy security cover, to launch the poll campaign in Madhya Pradesh where the Bharatiya Janata Party (BJP) has been ruling for the last 15 years.

Before hopping on to the bus for the roadshow, Gandhi performed a ‘puja’.

The roadshow, after passing through the main streets of the city, will conclude at the Bharat Heavy Electricals Ltd’s Dussehra Maidan, where the Congress president will interact with party cadres.

Before leaving in the evening, Gandhi will address a meeting of Congress workers, which is also open to public.