India   All India  17 Sep 2018  Think about Bharat Mata, Lotus when you campaign: Amit Shah to BJP workers
India, All India

Think about Bharat Mata, Lotus when you campaign: Amit Shah to BJP workers

Shah asked workers to work hard, saying polls can't be won only through achievements of the govt and it was election of party workers. 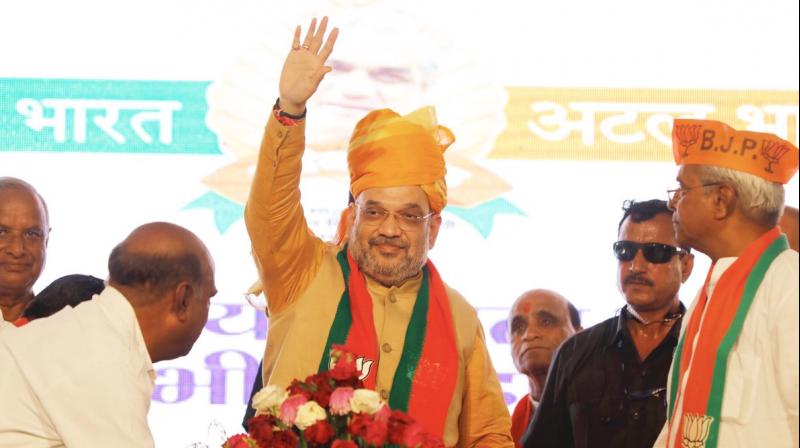 Party workers should think only about the party symbol 'Lotus' and 'Bharat Mata' (Mother India) when they campaign, he said at the 'Shakti Kendra Sammelan' event. (Photo: Twitter | @AmitShah)

Jaipur: BJP president Amit Shah Monday asked party workers in poll-bound Rajasthan to think about 'Bharat Mata' and 'Lotus' when they campaign, prompting opposition party Congress to ask whether he has lost faith in the state's Vasundhara Raje government.

Addressing BJP workers at an event in industrial city Bhilwara, Shah asked them to work hard at booth level, saying elections cannot be won only through achievements of the government and it was an election of party workers rather than just of any minister or chief minister.

At the same time, the BJP chief also said Prime Minister Narendra Modi and Chief Minister Vasundhara Raje are working as double engines to lead the country and the state, respectively, and every party worker should visit door-to-door to highlight the work done by the two leaders.

He also highlighted several achievements of the Modi government at the Centre, listing surgical strike against Pakistan, increase in minimum support price for farm produce and vaccination scheme among others. Exuding confidence in party workers, Shah said that it was not an election of any minister or chief minister but it was an election of party workers and the BJP.

Party workers should think only about the party symbol 'Lotus' and 'Bharat Mata' (Mother India) when they campaign, he said at the 'Shakti Kendra Sammelan' event.

Reacting to his speech, Rajasthan Congress Chief Sachin Pilot said the saffron party head has lost faith in five-year tenure of Raje government in the state as he was seeking votes in the name of 'Bharat Mata' and the BJP. Shah also hit out at the Congress on issues of NRC (National Register of Citizens in Assam) and surgical strike.

He said the 'Mahagathbandhan', or the grand alliance that the Opposition is talking about will not be able to defeat the BJP. At another event in Bhilwara, Shah celebrated Modi's birthday with differently-abled children and said the prime minister's life was dedicated people of the country, its pride and its development. Shah will address 'Shakti Kendra Sammelan' in Nagaur and Udaipur on Tuesday.

The BJP president is interacting with party workers at various places through this event. Since July, this is Shah's third visit to the state where assembly elections are scheduled to take place later this year.