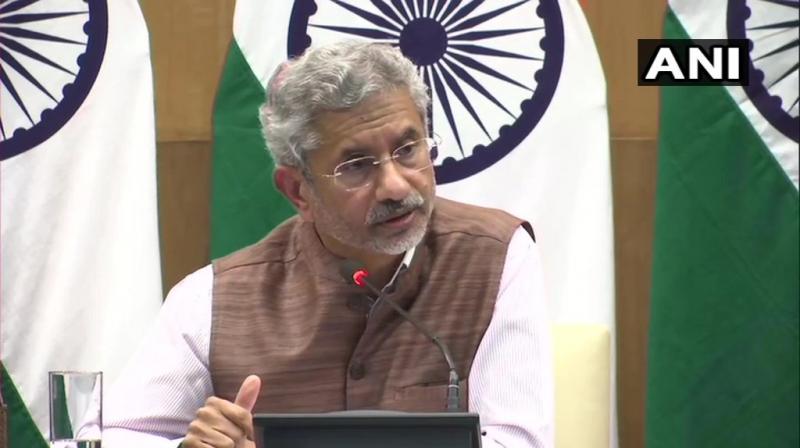 ‘Whether Pakistanis carried out in letter and spirit what International Court of Justice wanted them to do, I think the answer is obvious to all of you but nevertheless there was the well-being factor in our mind,’ he said. (Photo: ANI)

New Delhi: External Affairs Minister S Jaishankar said on Tuesday that ascertaining the well-being of Kulbhushan Jadhav was a priority and India accepted Pakistan's offer of consular access to him as New Delhi wanted to begin the proceedings howsoever dissatisfactory they may be.

Jaishankar, who was addressing a perss conference here on the performance of his ministry's first 100 days under his leadership, said that India will seek to find a solution, which will bring the innocent person back to the country.

Jaishankar said that India considered various factors after Pakistan was unwilling to provide unhindered and effective access to the former Naval officer.

"On Kulbhushan Jadhav issue, our objective was to seek access to him to ascertain his well being. At the same time, seeking access to him was one step in eventually providing that remedy, which the International Court of Justice (ICJ) has mandated it should. And finally finding a solution, which would bring an innocent person back to his country," Jaishankar said.

He said that ascertaining the well-being of Jadhav was a priority and India wanted to begin the proceedings, however unsatisfactory, they may be.

He expressed dissatisfaction with the manner in which Pakistan gave consular access.

"Whether Pakistanis carried out in letter and spirit what International Court of Justice wanted them to do, I think the answer is obvious to all of you but nevertheless there was the well-being factor in our mind," he said.

India had moved the ICJ after Jadhav was sentenced to death by a Pakistani military court on charges of "espionage and terrorism" in 2017.

India has rejected Pakistan's allegations against Jadhav and said he was kidnapped by from Iranian port of Chabahar where he was running a business.

Soon after the meeting, India had said that Jadhav appeared to be "under extreme pressure to parrot a false narrative to bolster Pakistan's untenable claims."

Pakistan said that Ahluwalia's meeting with Jadhav took place in the presence of its officials and was recorded.