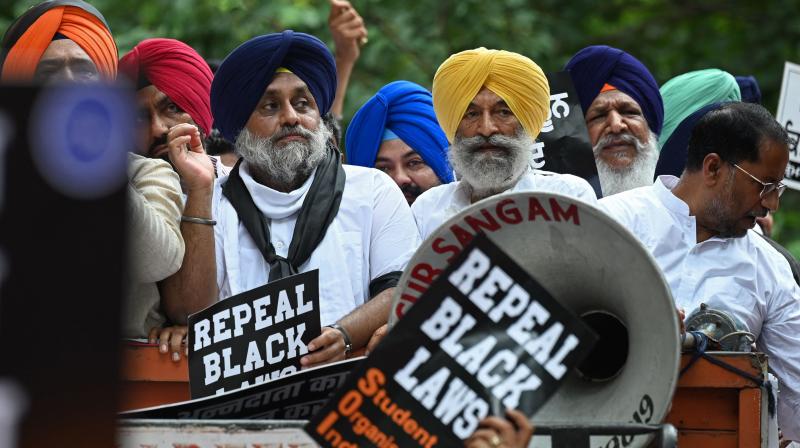 New Delhi: Ahead of the 'black Friday' protest march which was announced by Shiromani Akali Dal (SAD) on completion of one year of enactment of the three farms laws, the party said that borders of Gurdwara Rakab Ganj Sahib is being cordoned off and Delhi borders are being sealed.

"Looking at the number of farmers and Akali Dal cadre coming for the protest today, Rakab Ganj Sahib is being cordoned off to stop Punjabis from entering. This is a reminder of dark dictatorial times," the party tweeted.

SAD further alleged that Punjab registered vehicles are being stopped at the Delhi borders.

"All Delhi borders have been sealed and Punjab vehicles are being stopped. While all others pass, Punjabis are being told that our entry has been restricted. Our peaceful voices have seemingly scared the powers that be," they said.

To mark the completion of one year of continuing protests against three farm laws, a protest march was organised on Friday at 9.30 am from Gurdwara Rakab Ganj Sahib to the Parliament building.

The protest is said to be led by SAD President Sukhbir Singh Badal and SAD MP Harsimrat Kaur Badal.

Speaking to ANI, SAD General Secretary Prem Singh Chandumajra had assured that the protest march would be peaceful.

"The march will be peaceful. We will give a memorandum to Government to repeal the 3 farm Laws. Even if we don't get permission to protest, we will protest peacefully and give our memorandum," he had said.

The three farm laws that were passed last year include the Farmer's Produce Trade and Commerce (Promotion and Facilitation) Bill, 2020, and the Farmers (Empowerment and Protection) Agreement of Price Assurance and Farm Services Bill, 2020.