India   All India  17 Sep 2021  Change of power in Afghanistan not inclusive: PM Modi at SCO
India, All India

'SCO should work to develop a strong network among moderate, tolerant and inclusive institutions and traditions associated with Islam' 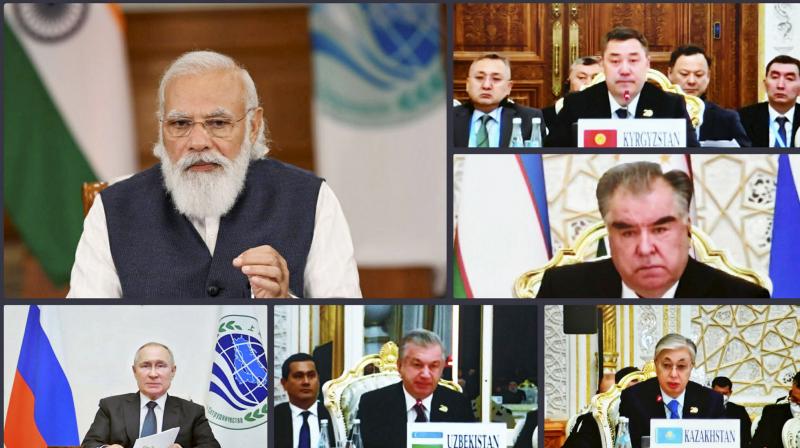 New Delhi: Addressing the 21st Shanghai Cooperation Organisation (SCO) Council of Heads of State  meeting in a virtual mode at Tajikistan’s capital Dushanbe, Prime Minister Narendra Modi on Friday suggested that the SCO should develop a common template to fight radicalism and extremism and strict norms to ensure that Afghan territory is not used for terrorism against any country, adding that such norms should be based on a policy of zero tolerance against terrorism and can become the basis of a template for global anti-terror cooperation.

He also suggested that the grouping frame a code of conduct to prevent cross-border terrorism and terror financing along with a mechanism for enforcement. Lashing out at the Taliban without naming it directly, PM Modi questioned any acceptance of the new ruling dispensation in Kabul, arguing that the regime change was not inclusive and had not taken place on the basis of negotiations. Pointing out that representation for Afghan women and minorities was important, he also advocated a global collective decision-making approach after careful deliberations on whether such a regime should be given recognition, further stating that India would support a central role for the United Nations on this subject.

PM Modi further suggested that the SCO should work to develop a strong network between moderate, tolerant and inclusive institutions and traditions associated with Islam that exist in India and almost all the other SCO countries. Pointing out that the situation in Afghanistan would have the maximum influence on its neighbouring countries like India, PM Modi said that if fundamentalism persisted in Afghanistan, it would only promote global terrorism and extremist thought and encourage extremist organisations to grab power through violence. He also felt the presence of a huge number of modern and advanced armaments in Afghanistan would be a source of instability in the region and felt that the SCO’s anti-terror mechanism RATS could monitor this. On the deteriorating humanitarian and economic situation in Afghanistan, PM Modi said India wanted to send food and medicines for the Afghan people and promised full cooperation to any global effort for such humanitarian assistance.

On the crucial issue of connectivity, PM Modi also felt the SCO should develop suitable norms for connectivity projects in the region. Launching a veiled critique of China’s Belt and Road Initiative (BRI) without any direct mention, PM Modi said that connectivity was not a one-way street and that connectivity projects should show respect for the territorial integrity of all countries and be consultative, transparent and participatory to ensure mutual trust. The China-Pakistan Economic Corridor (CPEC) that passes through Pakistan-occupied Kashmir (PoK) is a flagship project of the Chinese-led BRI. PM Modi chose instead to focus on India’s development of the Iranian port of Chabahar and the North-South Corridor as an effective connectivity initiative with land-locked Central Asia.

“My suggestions on radicalisation, connectivity and people-to-people relations will further strengthen this role of SCO,” Mr Modi said. The Prime Minister initially made some of the remarks while addressing the plenary session of the predominantly-Central Asian grouping in a virtual mode. Some of the comments on Afghanistan were made later again in a virtual mode at an outreach session on the situation in Afghanistan between the SCO and the Collective Security Treaty Organisation (CSTO), a security grouping of some of the post-Soviet nations, including Russia and Tajikistan.

Mr Modi’s comments urging an SCO response to the threats of radicalism and terrorism are seen as a veiled attack on the Taliban which captured power in Afghanistan a month ago through a lightning military conquest there. The comments are also being seen as a gesture of solidarity with the Central Asian Republics (CARs), especially the meeting’s host Tajikistan which has been concerned about the situation in Afghanistan and the Taliban’s atrocities on Afghanistan’s ethnic Tajik minority. PM Modi also praised Tajik President Emomali Rahmon for his “successful presidency of the SCO Council”  and for “managing the organisation efficiently in a very challenging global and regional environment”.

In his address in Hindi, PM Modi said, “The 20th anniversary of the SCO is also a suitable occasion to think about the future of the SCO.I believe that the biggest challenges in this area are related to peace, security and trust-deficit and the root cause of these problems is increasing radicalisation. Recent developments in Afghanistan have made this challenge more apparent. SCO should take an initiative on this issue. If we look at the history, we will find that the region of Central Asia has been a bastion of moderate and progressive cultures and values... On the basis of this historical heritage of Central Asia, SCO should develop a common template to fight radicalisation and extremism.”

He added, “Fighting radicalisation is not only necessary for regional security and mutual trust, but it is also necessary for the bright future of our younger generations ... I appreciate the useful work being done by SCO-RATS (the anti-terror mechanism of the grouping). We expect our SCO partners to actively participate in the calendar of activities that has been built for India’s presidency of SCO-RATS.” The comments are being seen as another veiled barb at Pakistan which is also an SCO member.

In a veiled barb at Pakistan, he added, “The vast economic potential of this region has also remained untapped due to radicalisation and insecurity, be it mineral wealth or intra-SCO trade, to take full advantage of them, we have to emphasise on mutual connectivity... India is committed to increasing its connectivity with Central Asia. We believe that land-locked Central Asian countries can benefit immensely by connecting with India’s vast market. Unfortunately, many connectivity options are not open to them today due to lack of mutual trust. Our investment in Iran’s Chabahar port and our efforts towards the International North-South Corridor are driven by this reality.”