Talwars’ case: Not guilty, yet held on suspicion!

In cases of cow-lynching, it did not take long for targeted persons suspected to be viewed as guilty. 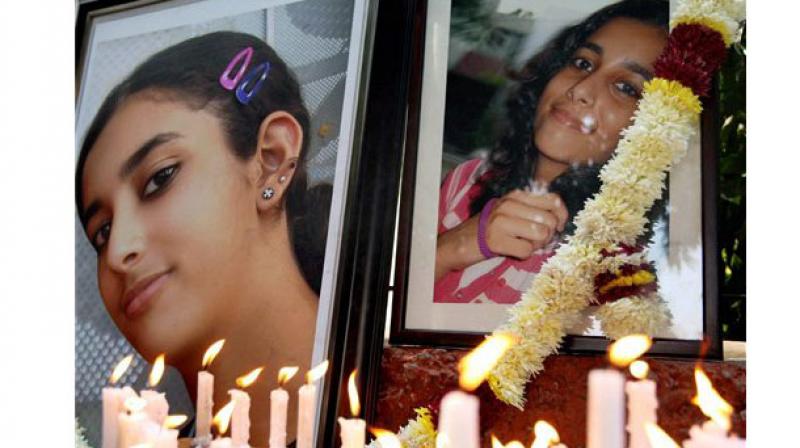 In this file photo friends and relatives of Aarushi Talwar light candles near her portrait to seek justice for her, at Jantar Mantar in New Delhi. The Allahabad high court on Thursday acquitted her parents Rajesh and Nupur Talwar in her murder case. (Photo: PTI )

The acquittal of Talwars, for now, held for murdering their daughter and their domestic help spells a lot of relief for them, their family members and also well-wishers. However, the questions that this case has brought into limelight cannot be ignored. Would the case have received the same attention had a movie linked with it, that is Talwar, not been made? How can it not be ignored that the parents had been viewed as the main accused for almost a decade for double murder. Yes, credit also needs to be given to their supporters who chose to pursue the case in their defence. And this raises yet another question. What about the persons held on charges of suspicion, who do not have means and resources to legally fight against charges levied against them? Despite their being innocent, a significant percentage of jail inmates are behind bars most probably because they cannot afford to appeal for justice. And herein one is compelled to deliberate on limitations placed before most citizens with respect to constitutional rights guaranteed to each Indian.

Herein, Talwars’ acquittal also confirms the point that so far they had been held on mere ground of suspicion and not because of there being adequate evidence on the charges levied against them. How can it be ignored that there lies a major difference between words guilty, suspected/alleged criminals and innocent person. Perhaps, the respected judicial and legal fraternity as well as political and social community needs to give greater importance to interpretation of these words. In certain cases, it takes little time to try and brainwash people about suspected and/or innocent persons being “guilty” of charges levied against them by a section of community. What else do recent cases of lynching people in the name of cow suggest?

In cases of cow-lynching, it did not take long for targeted persons suspected to be viewed as guilty. Without giving them and the legal process any time to investigate charges against them, they were “punished” as deemed fit by elements targeting them. Please note, mere suspicion laid ground for targeted persons being killed or brutally treated by those who chose to take law and order in their own hands. There have also been cases of persons assumed as terrorists and killed without their being sufficient evidence against them. Several cases have hit headlines of this action having been indulged in for the sake of promotion.

India alone is not home to mere “suspicion” being responsible for individuals being viewed as terrorists. In most cases, suspicion is build either on basis of religion and/or race of the one accused. The “crime” has little or no connection with charges levied against the one viewed as “guilty.” The case of the school-boy Ahmed Mohammed may be recalled (September 2015). Living in Texas, US he took to school, a digital clock he had made from a pencil case. The teachers suspected this to be a bomb and the teenager was arrested. Of course, luck and circumstances, took little time to turn the tide in this boy’s favour. But had a white, non-Muslim boy indulged in similar action, his “digital clock” would not have probably been viewed as “bomb” and he would not have been labelled as a terrorist.

The latter point is supported by white citizens in the US having indulged in serial killings on quite a few occasions. The latest example is that of Las Vegas. The criminal, a white American has not been called a terrorist. Of course, a few questions have been raised on why has he been spared the terrorist-tag? What an irony, a young school-boy was instantly viewed as a terrorist with a bomb, without there being any evidence against him. But a man is still not being considered a terrorist even though the serial killings committed by him may be viewed as pointers in this direction. He is not even being suspected as a terrorist.

There is nothing new about bias of this nature in America. Bias, resting on the basis of colour and religious identity of the accused, lays ground for suspicion and the accused being instantly viewed as guilty. The same is also responsible for tags such as terrorist and criminal being linked with their identity. Sadly, this trend prevails in India. Mere suspicion does not take long for targeted person’s character defamation, their being accused as guilty, thrashed, arrested and even killed by aggressive elements. Perhaps, it is time some attention was paid to action being taken regarding cases build on ground of mere suspicion, without any reliable evidence justifying the charges laid against accused persons. Suspicion, as Talwars’ case indicates, deprived them of their professional, economic and social stature for almost a decade. These cannot be replaced. There should be a precedent so that authorities as well as aggressive elements are compelled to exercise restraint from taking action against accused persons merely on ground of suspicion backed by flimsy or no evidence. Suspicion leading to trauma or life cannot be dismissed as a minor issue.